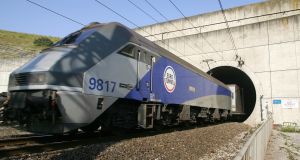 Eurotunnel warned last July that the Brexit-hit pound would impact earnings in 2016 and 2017, but results are better than expected.

The boss of Channel Tunnel owner Eurotunnel has cheered 2016 as its best year ever as the group shrugged off Brexit fears and the impact of terrorist attacks to post a surge in profits.

Eurotunnel said impressive growth in car and truck shuttle traffic helped offset a 4 per cent drop in passengers on the high-speed Eurostar rail, which it said was “badly affected” by the recent terrorist attacks in Paris, Brussels and Nice.

The group saw net consolidated profit nearly triple to €200 million last year, from €75 million in 2015, as it recovered from a tough 2015 and early 2016, when services were disrupted by the Calais migrant crisis.

The group’s trading cheer confirms that last summer’s worries in the immediate aftermath of the Brexit vote were overdone.

Eurotunnel warned last July that the Brexit-hit pound would impact earnings in 2016 and 2017 amid fears the plunging pound would put Britons off travelling abroad.

But on unveiling its annual results, chairman and chief executive Jacques Gounon said: “2016 was the best year in our history.”

He added that the group had improved its earnings’ outlook for the next two years, pencilling in earnings growth to €530 million this year and €560 million in 2018.

Eurotunnel said car traffic on the passenger shuttle reached its highest level since 2000, up 2 per cent at 2.6 million in 2016, while its truck services enjoyed an “exceptional” year, with traffic up 11 per cent to a record 1.6 million.

This comes after a tough 2015 and early 2016, when Eurotunnel faced heavy disruption to its services as migrants in Calais made repeated bids to cross to Britain.

Cross-Channel coach traffic fell 8 per cent as demand was hit by the terrorist attacks, while Eurostar traffic dropped to 10 million from 10.4 million in 2015.

But Eurotunnel said Eurostar traffic recovered in the final three months of 2016 to rise by 2 per cent, helped by a record December, when it saw passenger growth of 9 per cent.