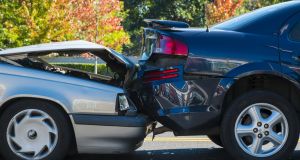 UK Ministry of Justice said current legal framework shows claimants must be treated as risk-averse investors, reflecting the fact they may be financially dependent on lump sums for a long time. Photograph: iStock

Shares in insurance groups fell sharply as the British government increased sharply the amount they will have to pay for personal injury compensation claims.

Britain’s biggest motor insurers Admiral and Direct Line fell s as much as 8.8 and 9.2 per cent in early trade before recovering some ground. Direct Line closed 7.2 per cent weaker on the day while Admiral was off 2.5 per cent.

Direct Line said the move would wipe £215-£230 million off its pre-tax profits, The Ministry of Justice had said last year it would alter the way that lump sum compensation payments are calculated, but the change announced on Monday is far more severe than many in the insurance sector were expecting.

The change will mostly affect the motor insurance industry, which has to pay compensation after serious traffic accidents. The decision could also cost the public finances £1 billion a year, mostly via higher compensation payments from the NHS.

The Association of British Insurers said the announcement was a “crazy decision” and “reckless in the extreme”. Huw Evans, director-general of the ABI, condemned the move, saying it would increase insurance premiums. “Claims costs will soar, making it inevitable that there will be an increase in motor and liability premiums for millions of drivers and businesses across the UK,” he said.

“We estimate that up to 36m individual and business motor insurance policies could be affected in order to overcompensate a few thousand claimants a year,” he added.

The change affects the discount rate used when judges work out how large lump sum payments should be. The lower the rate, the higher the lump sum. The rate for personal injury claims, known as the Ogden rate, has been set at 2.5 per cent since 2001.

On Monday the ministry said it would fall to -0.75 per cent, reflecting changes in the returns on index-linked gilts. Many in the insurance industry had expected a reduction to either 1 or 0 per cent.

Elizabeth Truss, Lord Chancellor and Justice Secretary, said: “The law is absolutely clear - as Lord Chancellor, I must make sure the right rate is set to compensate claimants. I am clear that this is the only legally acceptable rate I can set.”

The change will come into effect on March 20th. The government also said it would launch a consultation on whether there was a better way to calculate the payments.

Why the notion that building houses will cure our housing woes is bogus 05:27
Airline stocks bear the brunt of Covid-19 volatility 05:06
Coronavirus rocks financial world as hopes for containment fade 05:00
Coronavirus panic sweeps through global markets 19:08
Coronavirus: Iseq down 11% in five days as global sell-off is worst week since 2008 crisis 18:22

1 Why the notion that building houses will cure our housing woes is bogus
2 Irish companies restrict travel over coronavirus fears
3 Suspicions rife as key Brexit trade talks begin in Brussels
4 Corona beer firm reeling after 8% slide due to coronavirus
5 Bank leaked my loan request to family who tried to rip me off
6 Life as a Facebook moderator: ‘People are awful. This is what my job has taught me’
7 Coronavirus rocks financial world as hopes for containment fade
8 We have little chance of building enough homes to meet election promises
9 Coronavirus: Iseq down 11% in five days as global sell-off is worst week since 2008 crisis
10 Covid-19: Aer Lingus parent cuts capacity, unable to provide guidance
Real news has value SUBSCRIBE