Boeing plans to open its first European factory in Sheffield 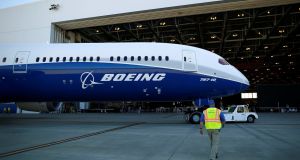 Boeing plans to open its first European factory in Sheffield in England, delivering a vote of confidence in the UK’s manufacturing capabilities after the Brexit vote.

The £20 million facility will supply parts for Boeing’s 737 short-haul workhorse and the 777 wide-body, specialising in actuation systems that extend and retract an aircraft’s wing flaps in different phases of flight.

“Our decision to start manufacturing high-value components in the UK is a step-change in our engagement and a further example of Boeing’s commitment to grow here,” Boeing Europe President Michael Arthur said in the release.

The Chicago-based company’s arch-rival Airbus Group SE focuses its entire wing-building operation on the UK, with design and some manufacturing undertaken at Filton, near Bristol, where 4,000 people are employed, and wing assembly performed at Broughton, Wales, which has more than 6,000 workers.

The Boeing plant will be located alongside Sheffield’s Advanced Manufacturing Research Centre, where McLaren Automotive said this month it will relocate chassis production from Austria in 2019, following the construction of a £50 million factory. That move will reduce the UK supercar maker’s exposure to potential tariffs on parts after Brexit.

While Boeing employs 2,000 people in Britain, they are all in non-manufacturing roles spanning training, sales and services, including maintenance work focused chiefly on defense platforms such as the Chinook helicopter.

The Sheffield site will work closely with Boeing’s Portland, Oregon, facility, which specialises in complex machining, gear systems and flight controls and which will assemble the actuator systems before they are dispatched to the company’s Seattle-area production lines.