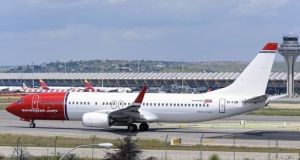 Norwegian Air’s fares extend to a seat on a flight and a cabin bag. Photograph: Getty Images

Norwegian Air International was offering just one flight for €69 one-way on its website on Friday, from Shannon Airport to Stewart in Newburgh, about 90km from New York city.

The Scandinavian group will begin flying from four Irish airports, Belfast, Cork, Dublin and Shannon to Stewart and Providence Rhode Island from next July.

While it was advertising fares from €69 one way, most of these disappeared within a few hours of the launch. But there were flights available at that price from Shannon to Stewart on February 8th.

Flights from Shannon to TF Green International Airport in Providence for several dates next August were also the most expensive at €409 one way.

Cork to Providence also offered some cheaper flights in spring 2018, at €109 one way.

As of Friday afternoon, anyone leaving from any of the four Irish airports could have expected to pay €250 from Cork or €270 from Dublin one way in July.

These dropped progressively through the autumn and winter through €220 and €200 to €119 next February, beyond which it is not possible to book.

Norwegian’s fares are simply for a seat on a flight and a cabin bag. It charges a number of extras on each flight.

TF Green Airport is in Providence, Rhode Island, which is a destination in its own right. Norwegian is advertising this as its Boston Airport. Providence is 112km from the Massachusetts city.

Once again it is accessible by road, bus and rail. Massachusetts Bay Transport Authority runs commuter trains between the two cities for $11.50.