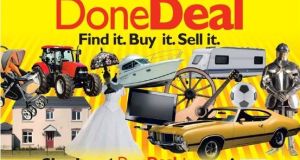 DoneDeal has released new data on the performance of its motor section in 2016, including the fact that 663,336 cars were advertised. Photograph: David Cheskin/PA

The value of goods advertised last year on the motor section of DoneDeal, Ireland’s most visited website for buying and selling cars, was €5.4 billion, the company has said.

Nearly one million ads were placed on the motor section of the website in 2016, a record number representing an increase of 9.3 per cent on 2015 figures, the company said.

The Volkswagen Golf was the top selling car on DoneDeal in 2016, followed by Ford Focus, VW Passat, BMW 3 Series and Audi A4. In total, 663,336 cars were advertised on the site during the year.

Black cars were the most popular, followed by blue, grey, red and white cars.

DoneDeal also experienced growth in advertising by dealerships. The number of ads increased by 21 per cent and the number of car dealers subscribing to DoneDeal was up 17 per cent.

Cathal Cremen, commercial manager of DoneDeal’s motor section, called 2016 had been “an exceptional year” in terms of traffic growth and adverts placed on the site.