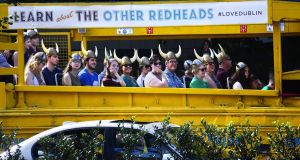 Tourism Ireland has made big efforts in recent weeks to drive home the message to British holidaymakers that they will not face travel restrictions after Brexit, the organisation’s head has said.

During December, Tourism Ireland executives spent several weeks meeting UK-based travel writers and agents to highlight the British and Irish governments’ guarantee that the common travel area between Ireland and the United Kingdom will remain in place after the January 31st departure.

The exit may offer a “bounce” in the number of British holidaymakers, said Tourism Ireland chief executive Niall Gibbons. But he cautioned that it is “too early to say if that will happen”.

Some 40 per cent of overseas tourists visiting the island come from Britain and the market remains crucial to tourism revenues, particularly outside the main tourist attractions such as Dublin, Belfast and Kerry, he said.

A new poll in Britain has found that 52 per cent of British holidaymakers had expressed interest in coming to Ireland, while one-third said the Irish were more fun than others, with the country scoring high on culture and craic, he said.

Much of the tourism boom in recent years has been delivered on the back of additional air access, particularly transatlantic flights which bring high-spending and long-staying visitors from the USA and Canada.

But failure to resolve the crisis surrounding the grounding of Boeing’s 737 Max aircraft following two crashes has already affected transatlantic travel, as airlines cut capacity. Consequently, this has contributed to a 4 per cent decline in passenger capacity into Ireland this winter.

Norwegian Air cancelled low-cost flights into Dublin, Cork and Shannon on six routes from the US and Canada last September, citing the grounding of aircraft which they had used. Ryanair, which has ordered 135 Boeing 737 Max aircraft, has blamed the closure of two of its European bases on delivery delays.

Company chief executive Michael O’Leary said it may be October before the new planes arrive, though the situation facing the Seattle-based aircraft manufacturer has worsened considerably since he made that prediction.

“The figures very much reflect feedback from our industry partners on the ground, who’ve seen weaker demand this year. The continued uncertainty around Brexit is giving rise to consumer concern in Britain and some mainland European markets.”