Aparthotel operator Staycity on target to deliver €100m turnover in 2020 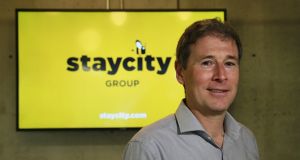 Staycity chief executive Tom Walsh: ‘We are on target to deliver revenues of over €100 million in 2020.’ Photograph: Nick Bradshaw

Irish aparthotel operator Staycity has reported record occupancy rates across its 3,000-strong portfolio and said it is on target to deliver revenues of more than €100 million in 2020.

The group, which operates a portfolio of 3,000 apartments across 12 European cities, said turnover for the year to the end of December rose by 14 per cent to €78 million.

The company also announced a new €22.5 million financing deal with Dunport Capital to support its growth plans. The deal replaces its five-year funding arrangement with Proventus Capital, which had come to an end.

“The year was a challenging one, particularly in the UK where confidence has been fragile due to Brexit uncertainty,” chief financial officer Wayne Arthur said. “Despite these challenges we delivered a record like-for-like occupancy of 87.3 per cent.”

The group said it had invested heavily in the business to support the opening of some 1,800 “keys” or rooms over the next two years. It hopes to grow its portfolio from 3,000 to 15,000 apartments by 2024.

In August, Staycity entered the Italian market for the first time with a 175-unit property in Venice while in September it opened a 284-room aparthotel in the popular Val d’Europe area near Disneyland Paris.

The year also marked Staycity’s entry into the German market with the opening of a 48-apartment Wilde Aparthotel in Berlin.

Staycity plans to open a 224-apartment property in Manchester’s Northern Quarter in March this year to be followed in November by a 142-apartment building on Dublin’s Mark Street. By 2021 it expects to have over 1,000 apartments operating in Dublin.

Staycity co-founder and chief executive Tom Walsh said: “I am delighted with the progress made in 2019, not only did we deliver industry-leading occupancy levels, we’ve also gained our strongest ever guest satisfaction scores.”

“We are on target to deliver revenues of over €100 million in 2020 along with continued profit growth,” he said.