Willie Walsh to step down as IAG chief executive 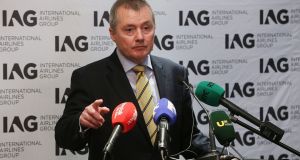 The Irishman said last November that he intended to retire within the next two years.

“I have indicated that I’m clearly getting closer to retirement ... the board has been working for some time, as you would expect, on succession planning,” Mr Walsh said at IAG’s annual capital markets day.

The former Aer Lingus chief executive said then that he planned to retire before his 60th birthday on October 25th, 2021.

“I still love what I do, but my intention is to be retired within the next two years.”

Speaking on Thursday, Mr Walsh said: “It has been a privilege to have been instrumental in the creation and development of IAG. I have had the pleasure of working with many exceptional people over the past 15 years at British Airways and at IAG.”

IAG chairman Antonio Vázquez, said that, under Mr Walsh, IAG had become one of the leading global airline groups.

“Willie has been the main driver of this unique idea that is IAG,” he said. “I hugely admire his commitment, strong leadership and clear vision, always ready to take on whatever challenges lay ahead of him.

“I am deeply respectful of what he has achieved as chief of this group, of his sense of fairness, his transparency and his capacity to integrate people regardless of nationalities or backgrounds.

“Willie has established a strong management team and I am delighted that Luis will be promoted from this team to succeed Willie as chief executive.”

Mr Gallego started his career in the airline industry in 1997 with Air Nostrum and, since 2014, has been chief executive of Iberia. The Spaniard will face intense scrutiny as he takes over from one of the most high-profile figures in Irish and British industry over the past 20 years.

Richard Buxton, of IAG shareholder Merian Global Investors, said Mr Walsh’s departure represented the end of an era. “But as they say, all good things must come to an end. I know his successor is a good egg, otherwise the board would not have appointed him,” Mr Buxton said.

Market reaction was positive, with IAG shares gaining 1.9 per cent to 630 pence by mid-afternoon.

Mr Walsh took on the unions and slashed costs first at Aer Lingus, and then at British Airways, earning him the nickname Slasher Walsh in an industry he once characterised as a “fight for survival”. It was at Aer Lingus where he formed the template for his strategy, benefiting from a front-row seat to the rapid expansion of Ryanair.

Mr Buxton said he would like the new chief to do more to improve labour relations between staff and management, adding that his company is counting on the new IAG leadership to do more to knit its brands together. – Additional reporting: Reuters