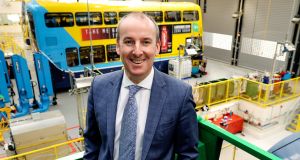 Dublin Bus is planning to look at the feasibility of developing its prime property sites for residential and commercial purposes, in addition to them continuing to operate as depots for its fleet of vehicles.

In an interview with Inside Business, a podcast from The Irish Times, Dublin Bus chief executive Ray Coyne said it would go to tender in the next two months seeking consultants to advise on its options.

“We’re going to tender for guidance and advice on all our depot sites ... and what we’re looking at is multipurpose facilities on our sites. What can you do with a bus depot in the future in the city centre or out on the outskirts?

“In the city centre environment, there’s lots of room above the depot and there’s also room below a depot. What we’ve seen in a number of other cities is that you can build above a bus depot and house your buses below ground level. You can [then] build mixed-use residential above.”

Mr Coyne said “economics is a key factor” in any potential future development of its sites.

He said Dublin Bus had met with the Land Development Agency (LDA) and with its parent group, CIÉ, to discuss its property holdings. The LDA was created by government to co-ordinate land under State control for more optimal uses, with a focus on providing housing.

“If you look at Ringsend, there’s high-rise apartments around that [depot]. So you can decant your buses out of Ringsend, do some retrofitting, build above and put your buses back in. There’s depot assets there; what’s the best use of those for the company and for the city?”

Mr Coyne said he has visited similar depots in Paris and Stockholm and “you’re just walking down a normal high street and a bus [comes out of a building]”.

He said the company’s switchover to electric buses over the next decade, which are “quiet vehicles”, would assist residential and commercial development at its sites.

Some commentators have suggested that Dublin Bus should vacate the city sites and relocate its depots to land around the M50.

Mr Coyne said it would be “less efficient” for Dublin Bus to relocate its depots to the outskirts of the city. “In Ringsend, our bus routes start outside the bus depot so there’s sustainability there.”

Dublin Bus has a substantial landbank in the capital, with operational depots on large sites in Ringsend, Donnybrook, Clontarf, Phibsborough, Summerhill (near Croke Park), and Conyngham Road (near the Phoenix Park). It also has a large garage in Harristown, at the back of Dublin Airport.

It has just completed a €15 million investment at its Broadstone depot on the northside of the city, which will house a fleet of 120 vehicles. The site dates back to 1847, when it was used as a railway station, and is shared with Bus Éireann.