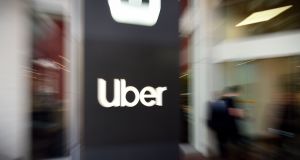 Uber Technologies lost a UK supreme court ruling over the rights of its drivers, in a landmark decision that strikes a blow against the gig economy. Photograph: Josh Edelson/AFP via Getty Images

Uber Technologies lost a UK supreme court ruling over the rights of its drivers, in a landmark decision that strikes a blow against the gig economy.

The judges unanimously ruled that Uber drivers are “workers” entitled to rights like minimum wage, holiday pay and rest breaks. Uber shares dropped as much as 1.5 per cent in early trading in New York before paring losses.

The ruling will have a significant impact on the UK’s burgeoning gig economy and comes amid a broader global fight over the rights of workers on apps. Many of the companies that rely on these kinds of workers have thrived during the global pandemic, deploying drivers to make deliveries to customers stuck at home while shops and restaurants were shut.

It “will make it much harder for companies engaging people via digital platforms to assert that they are self-employed”, said Michael Powner, a lawyer at Charles Russell Speechlys in London.

Uber’s fight over drivers’ employment rights extends across its global operations. In its home state of California, drivers are suing to invalidate a ballot measure approved last year that declared them independent contractors. Meanwhile, policy makers in the European Union are expected to publish recommendations for improving working conditions for gig-economy workers later this month.

“The ruling strikes at the heart of Uber’s business model,” said Paul Jennings, a lawyer at Bates Wells, who represented the drivers. “As a business, it will need to reflect very carefully on the implications of the judgment.”

The ruling is the end of the road for Uber’s five-year fight over the status of its drivers and another setback in the UK, which is home to the ride sharing company’s largest European market. Last year, Uber had to fight to retain its license to operate in London after the transport regulator complained about safety concerns.

Uber said that the ruling only applies to the handful of drivers that filed the initial case, but it will start a nationwide consultation, which will take a number of weeks.

“This process will seek the views of all active drivers to help us shape the future of flexible work,” the San Francisco-based company said in a statement.

Uber and the wider industry will particularly be looking at the supreme court’s question mark over its business model, the firm told Bloomberg. It will update the market on its next steps once they’ve read the ruling in detail and have completed the consultation.

London is one of Uber’s largest and most lucrative markets, with 45,000 drivers and 3.5 million people who use the app once every 90 days.

Tens of thousands of Uber drivers can now claim the right to be classified as workers, said Nigel Mackay, a lawyer at Leigh Day, who also represented the drivers. The firm will now seek compensation for thousands of drivers who he says are entitled to an average of £12,000 each.

The dispute will now return to a specialty tribunal, which will decide how much to award the 25 drivers who brought the case in 2016. About 1,000 similar claims against the company, which had been stayed until after the ruling, may also proceed.

In addition, the ruling may lead to a big tax bill for Uber, according to Aitor Ortiz, a litigation analyst for Bloomberg Intelligence.

“Uber risks paying about $1.3 billion in unpaid taxes after the UK supreme court determined that its drivers are workers,” Mr Ortiz wrote in a note. “Additionally, Uber’s loss means the company may face higher labour costs in the UK and probably in Europe where regulators are preparing new laws to protect gig workers.”

The supreme court also ruled that drivers are working anytime they’re “logged into the app and ready and willing to accept trips”. Uber had argued at a July hearing that this may result in drivers earning a minimum wage from multiple ride-sharing and delivery services, including its rivals.

6 Can I see copies of earlier wills my mother wrote?