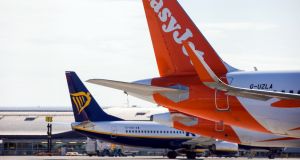 Shares of carriers like EasyJet and Ryanair that have a large UK presence advanced on Monday.

Ryanair has seen a “large surge” in bookings from the United Kingdom to holiday destinations since British prime minister Boris Johnson outlined a roadmap for a return to air travel.

Mr Johnson said on Monday that international trips may restart as soon as May 17th as part of the country’s plans to reopen the economy following months of restrictions to curb the spread of Covid-19.

In a statement to The Irish Times, Ryanair said: “Following the UK government’s announcement for the reopening of international air travel this summer, we have seen a large surge in bookings from the UK to holiday destinations in Spain, Greece and Italy.

“This is an encouraging trend and shows the importance of providing customer confidence. We remind our customers that any bookings made before March 31st can be moved twice until the end of October 2021.”

Meanwhile, its rival EasyJet said ticket sales had more than quadrupled in the hours after the announcement. Sales of package holidays soared 630 per cent, it said.

While the uptick represents only several hours of sales, it validates optimism for customer demand over the crucial summer season.

Shares of carriers like EasyJet, Ryanair Holdings and British Airways owner IAG that have a large UK presence advanced on Monday after the plan to gradually reopen the economy was announced.

“We have consistently seen that there is pent-up demand for travel,” EasyJet chief executive Johan Lundgren said in a statement.

“This surge in bookings shows that this signal from the government that it plans to reopen travel has been what UK consumers have been waiting for.”

Sunny spots such as Malaga, Alicante and Palma in Spain, Faro in Portugal and the Greek island of Crete are among top destinations, EasyJet said. While travel may reopen sooner, August is the most popular timeframe.

Elsewhere, Aer Lingus did not comment on whether it had noticed an uptick in bookings. (Additional reporting: Bloomberg)