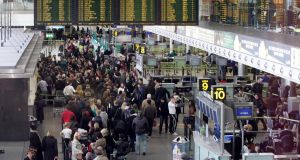 It was the eighth year in a row passenger numbers have grown at the airport, with the majority of passengers starting and ending their journey there, the airport said. About two million people used the airport as a hub, with figures rising following an investment in a €16 million transfer facility.

The number of passengers travelling on transatlantic routes hit a new high for the airport, and European destinations continued to show growth throughout the year, offsetting some of the slowdown in UK traffic.

Long-haul passengers accounted for five million last year, a rise of 15 per cent, while short-haul traffic rose by 5 per cent to 26.5 million.

The remaining one million long-haul passengers were travelling between Dublin and Asia, the Middle East and Africa.

The airport’s largest market is continental Europe, which rose 7 per cent last year as about 16.3 million passengers travelled between European destinations and Dublin.

UK traffic accounted for 10.1 million passengers, rising 1 per cent year on year. The airport authority said growth has been sluggish for the past two years due to the weakness of sterling due to Brexit concerns.

“Dublin Airport’s record passenger numbers also boosted Irish trade and exports and helped facilitate greater levels of foreign direct investment in Ireland and by Irish companies overseas. Air connectivity is essential for the Irish economy and the provision of new and expanded services at Dublin Airport benefits the entire country.”

Among the 16 new routes added to the airport last year were services to Beijing, Hong Kong, Montreal and Seattle. Meanwhile, there were capacity increases on 22 existing services.

This year will see the addition of 19 new long-haul routes, including Calgary, Dallas-Fort Worth, Minneapolis-St Paul, and Hamilton, Ontario. Additional short-haul routes to Sardinian capital Cagliari, Kiev, and Gothenburg will also come this year.