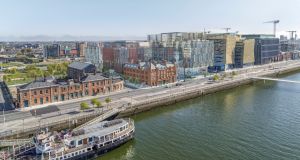 Irish hotel group Dalata has confirmed it has agreed terms to lease a new 200-bedroom, four-star hotel that will form part of the Spencer Place development on Dublin’s docklands.

The Spencer Place project will extend to more than 1 million sq ft and is being developed by a joint venture of Ronan Group Real Estate and Colony Capital.

Some 430,000 sq ft of office space in the development has been fully let already to Salesforce, a US-based software company, which plans to create 1,500 new jobs in Dublin over the next five years.

The move will bring Dalata’s reach in the docklands area up to four hotels, including the Gibson in the nearby docklands, the Maldron Hotel on Pearse Street, and the Clayton on Cardiff Lane.

Dermot Crowley, Dalata’s deputy chief executive, said: “The hotel will be superbly located to benefit from the very significant investment taking place in the docks area. The Dublin hotel market as a whole continues to perform very well and we are pleased that we will be bringing another quality hotel to the city. Today’s announcement brings the number of hotels in our development pipeline to nine with over 2,300 rooms in Dublin and the UK. We remain confident of announcing further new deals in 2019”.

The new hotel will operate within the Dalata portfolio but with “bespoke branding” consistent with the broader Spencer Place development.

Dalata said that construction has commenced with a target opening of the last three months of 2020. Dalata will operate the hotel on a 35 year operating lease, which will be subject to five year rent reviews linked to the consumer price index.

Earlier this month Dalata acquired a new 212-room hotel in London, which will be branded Clayton Hotel City of London.