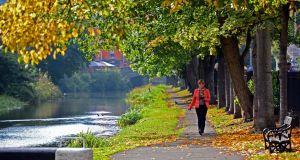 Waterways Ireland and Fáilte Ireland are looking to assess the potential of Dublin’s canals as tourist destinations. Photograph: Eric Luke

An in-depth study is to be carried out to discover whether there is an opportunity to market Dublin’s canals as a branded tourist destination to go alongside other regions such as the Wild Atlantic Way, Ireland’s Ancient East and the Hidden Heartlands.

Waterways Ireland and Fáilte Ireland have teamed up with a number of local councils to award a contract worth up to €50,000 for a study to assess the tourism potential of two routes that link the Royal Canal and Grand Canal.

The routes include a 40km outer loop that would be comparable to the Great Western Greenway, a popular route in Co Mayo which links Westport town and Achill Island. A smaller 25km inner-city loop that keeps close to the river Liffey is also envisaged.

In a tender notice published this week, Waterways Ireland said the Dublin City Canals Greenway “could become the arteries of community and economic development, wellness and tourism within Dublin city”.

“The aim of this project is to encourage the local, national and international visitor to immerse themselves actively in the Dublin canals, interacting with people, engaging their senses and learning the history and stories of the canals,” Waterways Ireland said in its notice.

“It is about delivering life-changing moments that inspire visitors to share their experiences of the area and also encourage them to make a return visit,” it added.

The planned 40km outer route travels along both the Royal Canal and Grand Canal, commencing in the Dublin docklands and continuing on to Lucan and then circling back to the city.

“As you meander along this route, it is hard to believe that you are close to Dublin city. the gentleness is awe inspiring, the potential boundless,” according to the blurb in the tender document.

A smaller 25km inner-city route that links in the canals and takes in the Phoenix Park, the War Memorial Gardens, Kilmainham Gaol and Richmond barracks is also envisaged.

Fiona Monaghan, former director of Fáilte Ireland’s Wild Atlantic Way project and now the body’s head of product development, said the study will hopefully reveal whether Dublin canals are a hidden gem yet to be discovered by visitors.

She told The Irish Times that promoting the would-be greenway as a place where visitors can walk or cycle could also encourage more Dublin-bound tourists to extend their stay by a day or two. It also fits in well with the “surprising by nature” branding that tourist bodies are now using to sell the capital.

The success of the Great Western Greenway, which was completed in July 2011 and has attracted 290,000 visitors, has given rise to a number of similar routes, including the Great Eastern Greenway along Carlingford Lough’s southern shore, the Old Rail Trail Greenway linking Mullingar and Athlone, and Waterford’s greenway, which goes from Waterford city along the Copper Coast to Dungarvan.