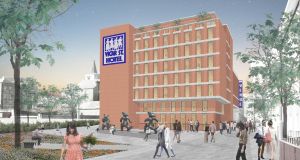 An artist’s impression of the new Vicar Street Hotel

Developer Harry Crosbie has been given the green light for a new eight-storey 185-bedroom hotel at Vicar Street in the Dublin Liberties in spite of some local opposition.

A spokesman for Mr Crosbie said on Tuesday that construction work on the Vicar St Hotel is scheduled to commence in the next few weeks and that the hotel will be open for business in 2020.

The new venture, when operational, will create 80 jobs and the spokesman said the hotel development “will create a new way for the public to enjoy a live show”.

“We will create a new ‘rock and room’ concept with our exclusive promoter Peter Aiken, ” he said. “We will upgrade the venue to ensure its continued status as Dublin’s premier mid-sized venue.”

Walls Construction, which worked with Mr Crosbie on the original Point Depot and when it was transformed into an arena, is to construct the hotel.

One of the conditions of planning is that the hotel firm pay Dublin City Council €487,407 towards public infrastructure for the area.

A report accompanying the planning application stated that the development will contribute significantly towards the implementation of a core strategy of the city development plan in respect of regeneration, urban design and economic and tourism development.

It also argued that the development “can provide a catalyst and dynamic for the regeneration and redevelopment of the Liberties area and will enhance the attractiveness and diversification of the city’s tourist accommodation offer”.

Fáilte Ireland also made a submission with the city council in support of the application.

However, a number of local residents, supported by People Before Profit TD Bríd Smith, lodged objections against the plan. In total, 12 objections were lodged. The residents of Catherine Street told the city council that the development would cause much distress to the residents of the area which, they say, has had continuous development for the past two years.

In her objection, Ms Smith stated that the application did not represent development sympathetic to an urban residential community bound by new student accommodation, a public house/music venue, a homeless hostel and two new hotels in the immediate vicinity.

The spokesman for Mr Crosbie confirmed the developer was also “working on a Vicar Street South in conjunction with Wexford County Council”.

Objectors to the Dublin scheme now have the option of appealing the Council decision to An Bord Pleanála.