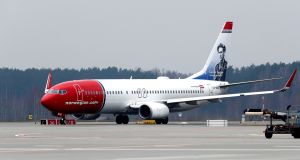 Norwegian Air will offer passengers booked to fly from Cork and Shannon to the US in early April alternative services from Dublin while it awaits new aircraft to replace the temporarily banned Boeing 737 Max.

The Irish Aviation Authority (IAA) has temporarily barred the B737 Max, which Norwegian uses, from entering the Republic’s airspace after two such planes crashed in Ethiopia and Indonesia.

Norwegian said on Monday that it would offer passengers booked to fly between Cork and Providence, Rhode Island, between April 2nd and 9th, alternative services to and from Dublin.

The airline will provide buses to bring passengers from Cork to Dublin, and to Cork for those arriving at Dublin from Providence.

Norwegian is also offering alternative services to and from Dublin to those booked to fly between Shannon and both Providence and Stewart International Airport in New York.

An airline spokesman confirmed that it intended flying to the US from both Cork and Shannon as planned from April 11th and intended sourcing Boeing 737-800 craft to fly these routes. Norwegian will use a Boeing 787-9 Dreamliner on the flights from Dublin.

The news that Norwegian is to resume services out of Cork Airport came as Tánaiste, Simon Coveney unveiled Cork’s €1 million new Airport Control Centre (ACC) and office complex which represents the first phase of a new €10 million investment at the airport, which will also bring an upgrade and expansion to its security systems.

Speaking at the official opening, Mr Coveney said Cork Airport’s growth and success were key components of the economy in the south of Ireland, connecting the region to 52 routes worldwide which this year would result in increased inbound tourism numbers for the southern region.

The airport has predicted passenger growth of 8 per cent over 2019 – with a total of 2.6 million passengers expected at the facility thanks to new routes and increased flight frequencies on services to the UK, France, Malta, Italy, Portugal, Hungary and Poland.