Ryanair likely to appeal ruling on Eindhoven base 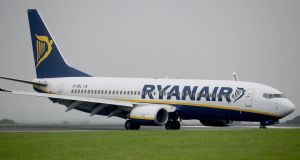 Ryanair must continue paying workers at its closed base in Eindhoven, the Dutch labour authority ruled. Photograph: Peter Byrne/PA

Ryanair could challenge a ruling by the Dutch authorities that it cannot lay off pilots and cabin crew at a base it has closed in the Netherlands.

The airline last November closed bases at Eindhoven in the Netherlands and Bremen in Germany, while it also cut numbers at Weeze Airport in the Rhineland.

The company blamed a fall in bookings, following strikes in several European countries, and rising costs for the closures.

The Dutch Employee Insurance Agency (UWV) has ruled that Ryanair cannot lay off 16 pilots and 15 cabin crew at Eindhoven.

It is understood that Ryanair intends appealing the authority’s ruling. It is open to the airline to challenge the decision in the Dutch courts.

The UWV is a Government agency that acts as the Netherlands’ labour law watchdog.

Unions say the ruling means that the Irish carrier must continue paying the workers even though the base remains closed. Ryanair has been paying the crew affected since Eindhoven closed.

David van de Greer, official with aviation union FNV, said the organisation was “very happy” with the outcome. “We represent cabin crew at Eindhoven and it’s been a long drawn out process for them,” he said.

Ryanair originally cited economic reasons for the closures and said that it would offer workers alternative posts to minimise job losses.

The airline argued that the cuts were a “small but necessary” response to adverse conditions.

However, labour group, including the FNV, accused the airline of attacking workers’ right to strike by closing the bases.