Security staff have rejected proposal, saying it will lead to unpredictable hours and pay 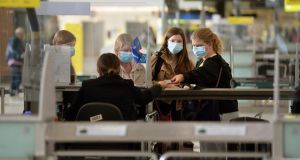 A row over rosters has stalled State company DAA’s efforts to reach a deal on work practice changes with about 800 Dublin Airport security staff.

Most workers at Cork and Dublin airports, both run by DAA, will vote soon on new work practices agreed by the company with unions Fórsa, Mandate and Siptu. The company is losing €1 million a day as coronavirus restrictions decimate travel.

Dublin Airport security staff have rejected DAA’s rostering proposals however, saying they will lead to unpredictable hours and pay for some of that group.

He explained that the flexible rosters only guaranteed the staff involved 20 hours per week, rising to 40 if needed, while the hours could change on seven days’ notice.

The 25 per cent of security workers on the flexible rosters would get 30 days’ advance notice of the hours they would be required to work.

A DAA spokeswoman pointed out that they would get a minimum of a weeks’ notice of an increase in their hours over the course of any one roster. However, the day won’t be changed, nor will their hours be shortened.

She also noted that 75 per cent of staff would have more certainty about their hours than in the past. “They will know from one end of the year to the other what their rosters are,” she added.

Mr McGowan argued that anyone in the flexible roster pool would have very little stability, while their earnings could vary a lot over a year.

He said that while DAA told Siptu that security staff can express interest in working in the flexible pool, the union was sceptical about this approach.

“It is likely to be the most junior people in the company, who are also the people on the lowest rates of pay,” Mr McGowan said.

DAA also wants to cut the number of Dublin Airport security staff from 800 to about 750 through voluntary redundancy.

Siptu argues that even it this was achieved, 25 per cent of 750 would still be a large number.

DAA is only accepting voluntary redundancy proposals from employees in sections where work practice changes have been agreed, so cutting security staff numbers hinges on a deal on rosters.

Mr McGowan confirmed that Siptu was open to continuing talks with DAA. “But we have heard nothing from management since,” he added.

Security staff, known as the airport search unit, are one of the biggest divisions within the DAA, which employs 3,500 people in the Republic.

Dalton Philips, DAA chief executive, recently warned that the company could not guarantee current pay rates beyond August 29th to staff in areas that had not agreed new work practices.

All the company’s workers accepted a 20 per cent pay cut in April when coronavirus first hit air travel. DAA then guaranteed this until August 29th.

Mr Philips pledged that once staff voted for new work practices, the company would continue paying them 80 per cent of their original rate, and work to restore this to 100 per cent.

1 Revenue publishes list of companies tapping State for wage support
2 Cosgrave Property Group secures exit from Nama
3 How long can Government afford to keep State pension age at 66?
4 Covid-19 will have a significantly worse impact on UK public finances than on ours
5 Bake-off soy sauce tweet backfires for UK trade ministry
6 Tighter regulations for car makers will drive buyers to choose electric
7 Developers may need to go back to the drawing board as one-beds fall from favour
8 NatWest CEO declines to give timeline for Ulster Bank decision
9 107 jobs at risk as Broderick’s shareholder considers examinership
10 Grocery shopping app Buymie delivering for Devan Hughes
Real news has value SUBSCRIBE