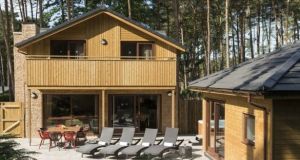 Four-bedroom lodge and patio at Center Parcs in Co Longford

Financial statements that were recently made available for the Center Parcs holiday site in Longford starkly illustrate the liquidity challenges facing the tourism industry due to the pandemic.

The accounts for the 12 months to April 23rd last show the resort generated revenues of €33.6 million, while it recorded a net loss of €13.8 million. Those top and bottom line figures barely tell half the story, however.

The holiday park didn’t begin trading until July 29th, 2019, and it was shut by the pandemic on March 13th, 2020, so the numbers only refer to 33 weeks of normal trading. As the park’s directors say in a note attached to the accounts, the numbers “are not representative of any ongoing performance”.

Once the pandemic hit, it had to pay out €7.3 million in customer refunds for cancellations. Its rolling operating costs while closed appear to run at €1 million per month. About 92 per cent of its staff are furloughed on the State’s wage subsidy scheme, it says, while the directors say Revenue allowed it to defer certain large tax payments that were due.

Meanwhile, its owner, infrastructure fund Brookfield, stepped in with a near €14 million funding lifeline.

If you strip out pre-opening costs and only judge the park’s performance during the period in which it traded normally, the Longford site generated Ebitda (earnings before interest, tax depreciation and amortisation – a standard metric of a business’s pure operating performance) of €7.9 million.

Since the accounts were signed off last September, we have had two more lockdowns, including the current one, which may end up running for close to five months into early summer. The State bill for supporting the wider industry will be enormous.

Center Parcs employed an average of 885 staff when it was open, and its Ebitda for that period shows it is a viable, potentially profitable business. Every penny the State spends supporting it, and other tourism businesses, until the sector can reopen may be money wisely spent in the long run.