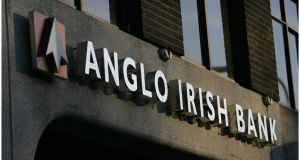 Browne, who left Anglo in 2007, is managing director of the asset and corporate finance advisory service LeBruin Private, which he co-founded in 2008 with former Anglo executive Cathal Fitzgerald. Photograph: Bryan O’Brien

The recent settlement in the High Court proceedings between the former Anglo Irish Bank executive Tom Browne and the Irish Bank Resolution Corporation (IBRC) also involved the withdrawal of a separate, though related set of proceedings between IBRC and Browne in relation to his family home and a property in Portugal.

Ownership of the home, on Brighton Road, Foxrock, Dublin, was transferred by Browne to his wife, Diane, in March 2008, registry filings show.

In June 2017 the liquidators of IBRC, Kieran Wallace and Eamonn Richardson, issued proceedings to have the property transfers reversed.

At the time, the proceedings by IBRC against Browne in relation to claimed debts of €30 million were on hold, as the case had to await the outcome of other legal proceedings linked to the collapse of Anglo post the financial crash. It is not known what, in particular, sparked the decision of the liquidators to issue the 2017 proceedings when they did.

The main case eventually went ahead in January, but was settled earlier this month with the court being told that Browne had consented to a judgment against him for €30.3 million as part of a financial settlement for a lesser amount.

As part of the settlement, the separate action in relation to the property transfers was withdrawn. Browne’s wife, Diane, is party to the settlement in the main case.

The size of the financial settlement was not disclosed, and neither side are commenting, but it is understood the amount is a material one. At the height of the boom Browne had a sizeable property portfolio, though it is understood little of that survived the crash.

These days, Browne, who left Anglo in 2007, is managing director of the asset and corporate finance advisory service LeBruin Private, which he co-founded in 2008 with former Anglo executive Cathal Fitzgerald, who owns 85 per cent of the business. The other shareholders are property developers Joe O’Reilly, Sean Reilly and Michael O’Flynn.

The latest filed accounts for LeBruin show a loss of €697,315 in the year to the end of April 2019, with the two directors, Browne and Fitzgerald, sharing total remuneration of €359,701.