Irish banks and their ESG credentials

Are the banks doing as well as we’re told? 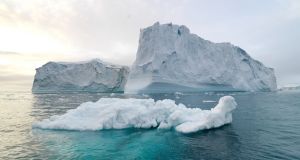 Icebergs in Greenland: According to the environmental, social and governance (ESG) rankings of the State’s main two banks, on the basis of third-party rankings, they fare reasonably well. Photograph: iStock

Last year Legal & General Investment Management (LGIM), one of the world’s largest investment firms and a leading climate advocate, rated the climate policies of 1,000 companies worldwide, including a group of Irish businesses, as part of its ongoing engagement programme to promote net-zero carbon emissions globally by 2050.

While not publishing individual results, it noted that while Irish companies scored highly on governance, disclosures, lobbying (positively) and setting targets, “this high-level alignment” was yet to translate into action.

The financial sector here was pinpointed as having lagged on performance.

And yet Goodbody last week looked at the environmental, social and governance (ESG) rankings of the State’s main two banks, finding that, on the basis of third-party rankings, they fare reasonably well. Sustainalytics – a company that rates the sustainability of listed companies – ranks AIB at number 71 out of 1,025 banks globally, giving it a “strong” rating for how it manages its sustainability issues. Bank of Ireland was also ranked relatively high at 176 and received a “strong” rating for ESG issues.

“Our analysis shows the main Irish banks are already making strong progress,” Goodbody noted in its report. “As banks regroup post-Covid, the transition to a sustainable economy and society is becoming the critical issue of the next cycle,” it said.

There’s no denying the role finance will play in the shift to a low carbon economy but it’s critical we judge banks by the right criteria. LGIM thinks the financial sector here could do better, Goodbody believes it’s leading the charge. They can’t both be right.