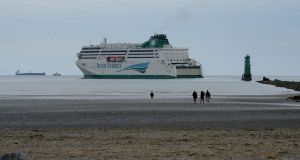 Subjecting people coming from Britain to the Republic to two-week quarantines, at a time when Boris Johnson’s government has exempted Irish citizens from its own restrictions, puts the entire Common Travel Area at risk post-Brexit, according to the head of ferry operator Irish Continental Group (ICG).

ICG, owner of Irish Ferries, has seen passenger numbers slump 60 per cent so far this year amid Covid-19 travel restrictions, it said in a trading statement on Thursday.

The company has written to the Government arguing that a requirement that people travelling to the State should self-isolate for 14 days is not consistent in the Common Travel Area (CTA) with the UK government’s position that no such measures be taken by passengers travelling from the Republic to Britain.

“There is nothing to stop people from Britain visiting Ireland by transiting via Northern Ireland without the requirement to self-isolate, which is clearly anomalous,” ICG said.

Speaking to The Irish Times, ICG chief executive Eamonn Rothwell said: “The CTA is going to be very important to Ireland post-Brexit. We don’t want to risk the British people turning around and saying, ‘Hold on a sec, we’re letting Irish people travel to Britain but you’re forcing British people to go via Northern Ireland.’ There’s a risk that they’ll retaliate.”

The Government’s quarantine rules for travellers came into effect on May 28th and are due initially to last until June 18th. Airlines Aer Lingus and Ryanair as well as business lobby group Ibec have called for the 14-day quarantine to be dropped entirely.

Meanwhile, ICG said that its freight business has remained relatively robust during the coronavirus pandemic. Roll-on, roll-off freight volumes have fallen 4 per cent in the year to June 6th, while container volumes have dropped 13 per cent.

“ICG has been one of the key freight providers into and out of Ireland during the shutdown, with particular spikes for food retail, but other areas such as e-commerce sales are likely to have supported demand despite the closure of so many industries including the construction sector,” said Goodbody Stockbrokers analyst Patrick O’Donnell. “In our view, the outlook remains strong for freight as the economy continues to open up.”

ICG said that it is currently unable to estimate the full-year financial impact of the fall-off in passenger revenue. “The severity of this reduction in passenger revenue is dependent on the duration and nature of travel restrictions, particularly over the peak summer season,” it said.

The Government moved in April to provide temporary funding for ferry operators by way of a public service obligation (PSO) subvention to maintain critical freight routes between the Republic and Britain, France and Spain amid a drop in passengers.

However, ICG said on Thursday that it has not participated in the initiative as it believes “this model was liable to create distortions in the marketplace and could be open to legal challenge”.

ICG also revealed that it has cancelled an order with shipmaker Flensburger Schiffbau-Gesellschaft (FSG) to build a new vessel, after the German company filed for protection from its creditors in April.

It comes less than two years after FSG created another major headache for ICG. Delays in 2018 in the delivery of a new vessel, called the WB Yeats, from FSG led to the cancellation of thousands of Irish Ferries bookings that summer, with about 30,000 passengers affected.

ICG had paid a 20 per cent deposit, equivalent to €33 million, on the second ferry, with the remainder due on delivery of the vessel. This was protected by third-party guarantees and has been returned.