Cityjet rejects claims it plans to use Scandinavian crew 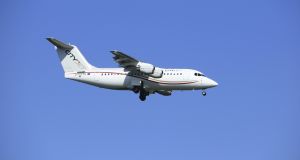 The Irish Airline Pilots’ Association believes the airline will use pilots based in Scandinavia to fly Irish-registered craft out of Dublin once services resume following the Covid-19 crisis. Photograph: iStock

The company wants to cut 280 jobs from its 1,175 total and this week began talks on redundancies with the Irish Airline Pilots’ Association (Ialpa), part of trade union Fórsa.

However, it is understood that Cityjet management, led by executive chairman Pat Byrne, has rejected an Ialpa claim that the carrier plans to replace 57 pilots it is seeking to let go at Dublin with crew from Scandinavia.

Ialpa believes the airline will use pilots based in Scandinavia to fly Irish-registered craft out of Dublin once services resume following the Covid-19 crisis.

Sources close to Cityjet described the claim as inaccurate and incomplete on Thursday, while they said the company was at a loss to understand why it was publicised while the sides were negotiating in good faith.

Cityjet provides craft and crew to fly short-haul routes for other airlines in Europe.

Covid-19 travel bans have cost it four out of five of these contracts, including a deal with Aer Lingus to fly from Dublin to London City Airport, Birmingham and Paris.

Air travel restrictions have also forced the closure of seven of its nine bases. The Irish carrier’s remaining contract is with Scandinavian airline, SAS, for which it flies routes in northern Europe using locally based crews.

A number of Dublin-based crew have flown services in Scandinavia, but sources point out that none of the craft used by Cityjet to serve the routes it flies for SAS have been based at the Irish airport. Instead they are based where they operate in Scandinavia.

Ialpa said this week that Cityjet pilots were prepared to take 50 per cent pay cuts and make other concessions to the airline until restrictions were lifted to aid its rescue.

A source close to the airline indicated that the company believed progress had been made on saving pilot jobs at Dublin. The talks are continuing while Cityjet remains in examinership.

Examinership gives troubled companies protection from creditors for up to 100 days to allow them come up with a rescue plan. Coronavirus travel bans forced Cityjet to seek Mr Wallace’s appointment.

The airline confirmed this week that it was in talks with its unions. Cityjet shifted several years ago to flying for other carriers from operating its own scheduled flights.