British Airways pilots to strike across three days in September 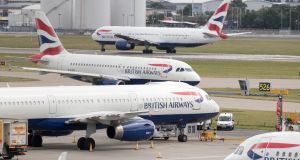 BA pilots are to stage a series of strikes next month in a dispute over pay. Photograph: Steve Parsons/PA Wire

Holidaymakers’ plans have been thrown into chaos after British Airways pilots confirmed they will strike across three days in September.

Thousands of people received emails overnight warning flights on September 9th, 10th and 27th would be hit by a “large number of delays and cancellations” after the British Airline Pilots’ Association (Balpa) union confirmed the action.

BA’s customer service lines were jammed on Saturday morning as travellers who awoke to the alert tried to find alternative arrangements.

The company’s Twitter feed was also inundated with messages from frustrated customers, with some complaining they would miss weddings and honeymoons.

A company statement said: “It is completely unacceptable that Balpa is destroying the plans of tens of thousands of our customers with this unjustifiable strike action.”

Balpa said 93 per cent of members voted in favour of the action after rejecting a pay rise package of 11.5 per cent over three years.

“The gap between BA’s position and Balpa’s position is about £5 million.

“Our proposal remains on the table should BA wish to reach agreement prior to strike action.”

Peter Dempsey (41) said his family could be forced to pay hundreds of pounds for alternative flights for a family wedding in Seville, southern Spain.

“It’s the return that has completely screwed us up as we are flying back with our in-laws and we cannot move the dates,” said Mr Dempsey, who flies out on September 5th for his wife’s cousin’s wedding.

“We have no option but to completely cancel both legs and rebook or they won’t give a refund.”

He said himself and three others were booked on the return journey, on September 9th, adding: “I’d estimate we will be about £200 out of pocket.

“Not a massive amount but not everyone has that kind of money. God knows what it is costing others who have flights to America etc.”

He said they spent £550 on their flights but to return on easyJet would cost £330, or to rebook with Ryanair roughly £200.

Mr Dempsey described the service since the announcement as “shocking”, adding BA “clearly don’t have enough people to handle such a crisis”.

Other flyers complained about a four-week wait for refunds and said bookings on their flights were still listed for sale online.

The airline’s statement added: “We will do everything we can to get as many people away on their journeys as possible.

“However, it is likely that many of our customers will not be able to travel and we will be offering refunds and re-bookings for passengers book on cancelled flights.”

It said flights with BA CityFlyer, Sun-Air and Comair were not affected and it was “exploring options to supplement our fleet by using aircraft and crew from other airlines”.

BA will also work with its partner airlines to schedule larger aircraft.

Chief executive Alex Cruz said the pilots had been offered an “incredible, inflation-busting deal” which would take a captain’s pay to over £200,000 a year and they had been “very badly served” by their union.

Bapla said: “Over recent years BA pilots have made sacrifice after sacrifice to assist the company such as taking a pay cut, productivity increases, closing the final salary pension scheme, giving up annual leave days, a new rostering system, and reducing flying pay.

“In what is British Airways’ centenary year, this will be the very first time its pilots will go on strike. They do so as a last resort and with enormous frustration at the way the business is now being run.

“Our ballot is valid until January, and more dates may be announced until such time as this matter is resolved.”–PA