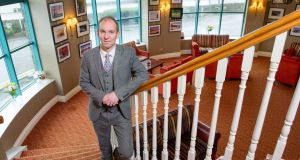 The UK is the biggest customer after the domestic market for the west Cork Celtic Ross Hotel, whose general manager has spent the last few years gearing up for the challenges posed by Brexit.

Neil Grant says the hotel in the village of Rosscarbery did not have any other markets until recently.

However it has now steadily grown its Dutch, US and domestic markets.

During its peak season, the Celtic Ross employs about 126 part-time and casual workers. Although this workforce drops to between 80 and 100 during the off-peak season, it still employs a significant number of casual staff at busy weekends during the down period.

However, since the vote for Brexit, the numbers coming to him from the first category has dropped significantly. This is primarily, says Mr Grant, due to changes in the euro to sterling exchange rate, which meant Ireland became a fifth more expensive to British visitors than it was prior to 2013/2014.

“The change in currency since the vote has made Ireland 22 per cent more expensive purely on the exchange rate, not to mention the fact that costs are also rising here since the recession.

“Labour costs are going through the roof – we’ve had three increases in the minimum wage, year on year, and all of that has had an effect on wages generally,” says Mr Grant, who adds that insurance costs have also increased hugely.

“Our insurance has jumped by well over 100 per cent since 2014, although our hotel claims history is not massive.

“In terms of British clients, we are becoming more expensive. Much of my UK market now comes through tour operators and the key thing is we don’t want to lose our UK market.”

To protect the hotel against any negative impacts from Brexit, he says, it is diversifying in terms of individual and tour operator markets both internationally and nationally.

“For the first time last year, I attended a trade show in Germany which features the major European travellers and tour operators.

“We need more European clients. We are promoting ourselves as a destination for individuals, couples and families as well as for tour operators in countries like Holland, and increasing our market share in terms of the US tour operators. We think it’s very important to diversify.

“Our domestic trade accounts for between 60 per cent and 70 per cent of our trade. However, we realise that we are also competing in terms of Irish holiday makers who want to travel abroad, so we have to attract new guests who have not been to us before.

“Therefore, we are now promoting ourselves in parts of Ireland that we previously would not have identified as a key market.”

On top of increasing the hotel’s reach in terms of Irish and foreign markets, he says, the Celtic Ross is also working hard to offer increased value for money to those UK customers hit hard by the currency exchange rates.

“We are going all out to keep them happy in the context of price increases. We do this by adding value to what they get – for example offering tea/coffee and a scone on arrival, and offering sea-view rooms.

“We are trying to look after them as best we can while still hopefully increasing our prices when costs go up.”

For Leger Holidays, one of the UK tour operators that brings tours to the Celtic Ross Hotel, the message about Brexit is one of reassurance to clients.

Chris Plummer, Leger’s operations director, says although Ireland is only “a very small part” of its programme, it is sending out a positive message to the tours which book holidays in Ireland through Leger. Business has generally been as brisk as ever, although in recent months the company had “some degree of slowdown” in relation to its bookings for Ireland.

“However, our market is very resilient. We are going out with a positive message to our clients. It’s about giving clients reassurance that their holidays are safe and that they are safe booking with us.

“We want to wait and see what happens. Sales have been strong but Brexit will impact on Ireland and also on Europe, so any resources we would put into Ireland we would put into Europe. However, at this moment in time, bookings remain strong and the outlook is optimistic.”