Tullymore House Ltd, which owns the Galgorm Spa and Golf Resort, has acquired the Templeton Hotel in Co Antrim 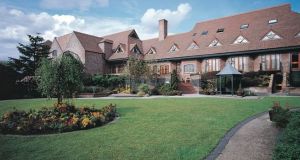 One of Northern Ireland’s leading hospitality groups has expanding its portfolio with the acquisition of a Co Antrim hotel in an deal estimated to be worth £7 million (€8 million).

The hospitality group, Tullymore House Ltd, which owns the Galgorm Spa and Golf Resort, has acquired the Templeton Hotel in Co Antrim.

“The Galgorm Collection are an extensive investor in Northern Ireland and our latest exciting venture in Templepatrick will bring our current employee count to just short of 1,000 people,” he said.

The Galgorm Resort, which is set in a 163-acre estate, was developed by two brothers from Ballymena, Paul and Nicholas Hill, nearly 30 years ago.

The two, who remain major shareholders in Tullymore House Ltd, have invested more than £30 million in creating the destination resort in Ballymena, which won global spa of the year at the World Luxury Hotel Awards two years ago.

The brothers have also expanded into the restaurant business and currently own two Italian restaurants in Belfast, where they are also planning to develop a hotel.

Latest accounts show Tullymore House Ltd reported a turnover of more than £22 million and pre-tax profits of more than £7 million in 2017.

The group now plans to redevelop the 24-bedroom Templeton hotel which had been operated by the McCombe family since 1990. It also intends to create an additional 50 jobs.