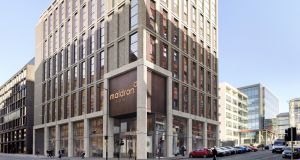 About £85 million (€97 million) will be invested in developing the hotels located in Birmingham and Glasgow. The two hotels will have a total of 630 bedrooms and will be operated under the four-star Maldron brand.

In a statement on Tuesday, McAleer & Rushe said it intended to begin construction on both hotels this summer with “practical completion” anticipated within two years.

Dublin-listed Dalata, with a market value of more than €1 billion, intends to employ about 100 staff in its new 300-bed Glasgow hotel and up to 105 staff in its 330-bed Birmingham hotel. The development there, on a derelict site, will feature a business centre, bar and restaurant with guest rooms arranged over 10 floors.

The Glasgow development forms part of a wider masterplan by McAleer and Rushe to include 100,000sq ft of office space.

Dalata is in the process of developing nine new hotels with a total of 2,333 bedrooms. Their developments will bring the total number of bedrooms it controls to more than 11,000. The group’s portfolio consists of 29 owned hotels, 10 leased hotels and three management contracts.