Boost for Belfast as Airbus flogs A220 jets 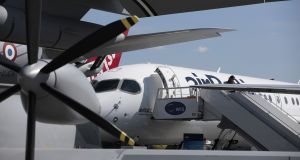 Airbus kicked off the biennial Paris air show winning an order for 100 narrow-body aircraft from including 50 of the A220 jetliner for which the wings are built in Belfast.

The list price of the A220 that Airbus acquired from Bombardier is about $91.5 million. The contract is worth as much as $11 billion to Airbus and marks an important win for for the company as it tries to build up the order pipeline for the A220, formerly the C-Series jet.

Elsewhere, General Electric’s jet-leasing unit agreed to provide the first nine aircraft for a new US carrier planned by airline entrepreneur David Neeleman. GE Capital Aviation Services and Neeleman signed a letter of intent for the purchase and leaseback of nine Airbus A220-300 planes that will be delivered in 2021 and 2022.

The wins for Airbus came as Boeing chief executive Dennis Muilenburg threw his support behind the beleaguered 737 Max aircraft with a prediction that the plane will reclaim its position as a single-aisle workhorse following upgrades on the model that’s been grounded since March.

Speaking on the first day of the Paris Air Show, the chief executive reaffirmed his confidence that the Max will return to service before the end of the year and that the plane will remain the backbone of the company’s short-haul strategy for years to come. He dismissed the notion that two deadly Max crashes in a five-month span would force Boeing to accelerate the introduction of an all-new model as a replacement.

“The long-term, multi-decade strategy hasn’t changed,” Mr Muilenburg said on Monday in an interview with Bloomberg Television. Any new aircraft in the single-aisle space, the most common category in civil aviation, remains “a much more distant decision for the next couple decades,” he said.

Boeing is betting that it can win back support from customers and the flying public for the Max, the newest version of the world’s most widely used aircraft. The alternative - a multi-billion-dollar investment in an all-new replacement - would be a risky path both financially and technically because engineering advances probably won’t be sufficiently mature for another decade to justify such a huge investment.

Prior to the crashes, both Boeing and Airbus had been expected to maintain their existing narrow-body fleets at least until the end of next decade. But the Max disasters spurred questions about whether Boeing would have to upend its plans as the accidents - one in October and another in March, both killing everyone on board - plunged the company into one of the deepest crises in its century-long history.

The company is reviewing “every dimension of design and certification” and has identified some changes, Mr Muilenburg said, with the hope of getting the plane back into service before the end of the year. “We are going deeper than normal, and we encourage that,” Mr Muilenburg said. Given there are more than 4,000 Max aircraft still in the order backlog,

Boeing has no plan to accelerate the development of a successor, Mr Muilenburg said, calling the Max a “very strong product line.”

At the same time, the company continues work on an all-new model that would sit between the single-aisle and wide-body aircraft, dubbed the New Mid-Market Airplane or NMA, with a plan for that model to begin service around 2025, Mr Muilenburg said.

The NMA would help Boeing arrest a march by Airbus in a space that’s been left largely unoccupied since the US planemaker stopped manufacturing the 757. – Bloomberg