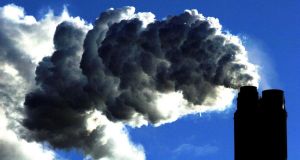 The State is ranked seventh among EU member states based on a draft national energy and climate plan submitted to Brussels, but actions committed to are deemed ‘insufficient’. Photograph: John Giles/PA Wire

A new climate ranking indicates most EU governments will fail to meet their own 2030 emissions targets by cutting carbon pollution from transport. These countries, including the State, face multibillion euro fines as a consequence.

Only the top three – the Netherlands, the UK and Spain – scored above 50 per cent in the ranking of draft national energy and climate plans compiled by the NGO Transport & Environment (T&E). Transport is Europe’s largest source of emissions.

The State is ranked seventh among EU member states based on a draft national energy and climate plan submitted to Brussels last December, but actions committed to are deemed “insufficient” to avoid offsetting penalties.

“All countries need to implement far more effective policies to reduce transport emissions than have been proposed to date,” T&E concludes.

The State is given credit for phasing out non-zero-emission cars and vans by 2030, but is criticised for its plan to double food-based bioethanol by 2030 compared with today’s levels, which the NGO says will mean promotion of fossil gas in trucks.

On cars and vans, it says the Government should clarify the meaning of “zero emission-capable”. Ireland has indicated it will have 500,000 electric vehicles, 75 per cent of which would be battery EVs and the remainder plug-in hybrids by 2030.

In other areas, the report is more critical. The State’s commitments on aviation are deemed “problematic” and based on dubious offsets, while rail is only mentioned in the context of implementing the existing rail plan for the Greater Dublin Area.

Shipping is totally ignored, it finds. “Ireland cannot decarbonise its economy without dealing with the emissions from the sector.”

On heavy goods vehicles, it notes that only fossil gas (compressed natural gas and liquefied natural gas) and biofuels are mentioned, “which is negative. They don’t mention other available technologies”.

On fuel it points to proposed compressed natural gas stations and a liquefied natural gas terminal being built in Ireland but warns gas is a fossil fuel – “it doesn’t reduce emissions”.

While the reports refers to “public transport, modal shift and investments on cycling and walking infrastructure”, there are no details provided – likewise on use of congestion charging.

The Netherlands has pledged that no fossil fuel cars will be sold there by 2030 and to reduce overall transport emissions by 29 per cent compared with 2005 levels. However, its top ranking is contingent on a draft national climate agreement, which the government has already said it will weaken.

The UK and Spain have similar plans to ban fossil fuel cars by 2040, “far too late to decarbonise the vehicle fleet by 2050”.

Carlos Calvo Ambel, trends and analysis director at T&E, said: “Right now most EU governments’ transport climate plans will see them miss the EU’s binding 2030 emissions targets. That means they could be taken to court and fined, or be forced to pay for emission reductions in other EU countries.”

Of the lower-ranked EU countries, Germany (15th) has postponed making decisions until the final version of its plan is published later this year, while Italy (17th) plans to push gas-powered cars and trucks despite them emitting as much greenhouse gases as petrol and diesel vehicles.

Of the bottom two, Bulgaria’s plan contains nothing to cut truck, van, aviation or shipping emissions, while Hungary says it will grow its transport emissions to 30 per cent above 2005 levels.

The European Commission is due to publish its analysis of member states’ national energy and climate plans by the end of the month.

“The EU elections green wave shows Europeans want the EU to stand up for the environment. The new commission should send governments back to the drawing boards and tell them to come up with a plan that doesn’t ignore the children marching on our streets,” Mr Calvo Ambel added.