Move will open up exporters in southeast to international trade routes 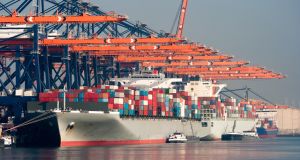 The port of Rotterdam. “The call in Waterford will boost the shipping options for local businesses, enabling them to reach Rotterdam within days and connect to the rest of the world.” Photograph: iStock

A Dutch shipping line will open up Waterford port to new international trade routes when it commences a weekly service on the Waterford to Rotterdam route which will act as a deep-sea feeder for Irish importers and exporters.

BG Freight Line, in partnership with global shipping giant Maersk, is to commence the service on July 6th to support industry in the southeast. Effectively the move will allow goods travelling from Waterford to continue through Rotterdam to other ports such as Shanghai, whereas previously goods for destinations beyond Europe would typically have shipped from Dublin.

Part of the Peel Ports Group, BG Freight Line runs a fleet of 23 containerised vessels from its headquarters in the Netherlands. Maersk, meanwhile, is the largest container logistics organisation in the world, moving more than 12 million containers a year.

BG Freight Line chief executive Koert Luitwieler said the addition of Waterford to its network would strengthen the company’s Irish Sea network which encompassed routes from Dublin and Cork at present.

“The call in Waterford will boost the shipping options for local businesses, enabling them to reach Rotterdam within days and connect to the rest of the world.”

Frank Ronan, chief executive of the Port of Waterford, said the decision to start the service was the culmination of a lot of work on the back of consistent support from exporters, particularly in the agri-foods sector.

“The new service will be especially valuable to customers shipping containers to or from Africa, Asia and the Americas as it will feed into the global hub at Rotterdam and allow seamless movement of goods between Waterford and the rest of the world,” Mr Ronan said.

The Port of Waterford is also looking to capitalise on Dublin Port’s decision to restrict calls from cruise liners from 2021. The company has 20 bookings for this year, in line with 2018, but recently noted plans to work on promoting Waterford as a cruising destination.

In 2018, the company grew turnover to €8 million, up from €7.6 million the previous year. The company paid a €330,000 dividend to the Department of Transport, Tourism and Sport during the year.