BMW to launch over a dozen fully-electric models by 2023 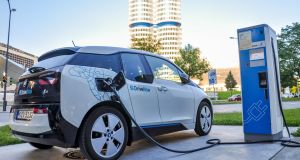 According to Harald Krüger, chairman of the board of management at BMW Group: “We expect to see a steep growth curve towards 2025: Sales of our electrified vehicles should increase by an average of 30 per cent every year.”

BMW is to launch over a dozen new all-electric models by 2023, two years earlier than planned. The German premium car maker has committed to offer 25 electrified models - either fully electric or plug-in hybrid - within the next four years, which is ahead of what was initially promised by the group, which also owns the Mini and Rolls Royce brands.

It has already confirmed five of the fully electric models, but says than more than half the 25 planned future electrified models will be fully electric.

The move is timely for the Irish market, as the Government’s new Climate Action Plan sets a target of 950,000 electric vehicles on Ireland’s roads by 2030.

However, speaking to The Irish Times, Pieter Nota, BMW board member in charge of sales warned against the Irish Government’s plan to ban the sale of new non-zero emission cars from 2030. “For us the road is not to force certain technologies through, it’s more about the end results environmentally, it’s about clean air. We see also an important role for plug-in hybrids in cities,” he said.

“We don’t support any drivetrain-specific bans and we wouldn’t recommend that. We advocate technology openness, and we see ways to reduce CO2 emissions significantly in other drivetrain set-ups (like petrol hybrids). But in this case our portfolio will be able to cater to such markets, but I would not recommend it. Highly efficient hybrids will be part of the future.”

Asked if BMW would consider withdrawing from the Irish market if the ban is introduced, he said: “We wouldn’t find it wise to withdraw from a market. We would rather see dialogue, we would seek to talk with the Government and engage with relevant product offerings.”

At the launch event, Harald Krüger, chairman of the board of management at BMW Group, said: “Over the past two years, we have consistently taken numerous decisions that we are now bringing to the roads. By 2021, we will have doubled our sales of electrified vehicles compared with 2019. We will offer 25 electrified vehicles already in 2023 - two years earlier than originally planned. We expect to see a steep growth curve towards 2025: Sales of our electrified vehicles should increase by an average of 30 per cent every year.”

Currently BMW’s only fully-electric model is the i3 hatchback, but it will be joined later this year by the fully-electric Mini, built at the company’s plant in Oxford. It will be followed next year by a fully electric iX3 crossover, built in China. In 2021 BMW will add the larger fully electric SUV, the iNext, and the i4 electric coupe, built in Munich. Other EV models will follow but the company will not confirm what these will be as yet.

Alongside these, will be a host of plug-in hybrid variants of its current range, including 3-Series, 5-Series, X3 and X5. It is also introducing a new system called eDrive zones. Developed after a pilot project in Rotterdam, the car recognises “green zones” set out by local councils solely for electric vehicles. When the hybrids enter these areas, identified using geofencing technology, they will only run on electric power.

Krüger was speaking at the launch of its future strategy for electric cars, autonomous technology and support services, called #NextGen. The company has come under pressure of late for losing ground to rivals at Audi and Mercedes-Benz in terms of the speed at which it was delivering new fully-electric models to its range, in particular for the growing crossover and SUV market. While it held a lead with its i3 when it was first launched six years ago, progressed slowed in the intervening period. During this period BMW tended to focus on plug-in hybrids rather than new fully-electric models.

The company is also rolling out several digital services for users. All its digital services will be offered under NOW brand, including its voice-activated personal assistant, remote software upgrades and a the integration of Amazon Alexa services with BMW and Mini models. Customers can access most of the functions they have in their Alexa home device while in the car, such as appointments, to-do lists and shopping lists.

Other new services include a digital key service that lets you use an Android smartphone instead of a key to lock and unlock the car through Near Field Communication (NFC). The key access can also be shared remotely with five other users and access times set for these keys. Finally, it also allows owners of electric BMW models to reserve a recharging plug if they are within 20 minutes drive of the recharging station.

Answering questions on stage at the event, Mr Krüger said BMW is very different from rivals. “To make it crystal clear we were not cheating on the diesel engines. BMW has e in serious engineering, we believe in transparency, we believe in honesty and we are driven by performance and these are the core values of BMW.”