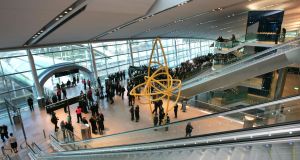 Dublin Airport. The loan will be used to upgrade baggage screening, extra check-in kiosks, an upgrade for the two existing runways and the conversion of the airport’s vehicle fleet to be entirely electric

Taoiseach Leo Varadkar will announce a €350 million loan to Dublin Airport to improve passenger services, facilities and capacity when he visits the headquarters of the European Investment Bank (EIB) in Luxembourg on Friday.

The 20-year loan, the largest ever for transport infrastructure in Ireland, will be used to “improve operations at peak times and covers a wide range of projects including an upgrade to the baggage screening systems, additional self-service check-in kiosks, an upgrade for the two existing runways and the conversion of the airport’s vehicle fleet to be entirely electric”, the Government said in a statement.

Mr Varadkar will travel to Luxembourg after the conclusion of Friday’s EU summit in Brussels for meetings with EIB president Werner Hoyer, vice-president Andrew McDowell – a former adviser to taoiseach Enda Kenny – as well as senior EIB staff.

“As an island nation Ireland depends on aviation for international connectivity. Without it we’d be poor and isolated,” Mr Varadkar said on Thursday night in a statement. “This investment will improve the airport experience for passengers by reducing delays, improving security and providing for some climate-related mitigation by electrifying the airport vehicle fleet.”

He said he would also use the EIB visit to discuss “future loan opportunities for housing projects and the national broadband plan”.

Mr Hoyer said in a statement that the “record level of support to a transport project in Ireland” would “strengthen Ireland’s connections to Europe and the rest of the world”.

The EIB is owned by the 28 EU member states. It says it has “supported long-term investment across Ireland since 1973, and over the last decade has provided more than €7 billion for education, transport, health, social housing, energy, agriculture and business investment.”