State paid €1.6m for Rosslare site to carry out checks in the event of no-deal Brexit

Site is part of €7.8m spent by the State buying land and developing properties at Dublin port, Dublin airport and Rosslare port 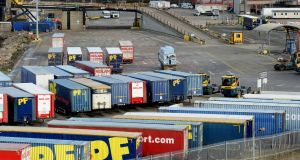 The State paid €1.6 million for a site near Rosslare Port where State inspectors will carry out checks on UK imports in the event of a no-deal Brexit.

The purchase price paid by the Office of Public Works (OPW) for the 16-acre site about two kilometres from the southeastern port is revealed in a record released by the State agency under the Freedom of Information Act.

An invoice, released to The Irish Times, by the OPW shows that the State bought the former Renault car import centre from Wexford haulage company Baku GLS in March, just weeks before the UK was originally scheduled to leave the EU at the end of that month.

The €1.6 million cost of the site is part of an overall bill of €7.8 million spent by the State buying land and developing properties at Dublin port, Dublin airport and Rosslare port for post-Brexit border checks.

The State plans to carry out customs, food and animal health checks on goods moving through Rosslare port on lorries and other heavy goods vehicles arriving from Britain in the event that the UK leaves the EU without a deal on the next Brexit deadline of October 31st.

Construction work is being carried out on the property in preparation for Brexit.

The property is a stopgap measure to prevent traffic delays for vehicles leaving the port in the event that the port has to be ready to deal with the UK crashing out of the EU without a deal in just over four months.

The Revenue Commissioners plans to operate a traffic light customs systems where truck drivers coming into Rosslare will be informed 15 minutes before their arrival whether they will be routed through a red channel that will bring them to the newly acquired property.

Rosslare Europort, which is owned by the semi-State bus and rail group CIÉ, plans to build a single, centralised compound within the port comprising 13 inspections bays, parking for 35 trucks and a dedicated border control post for live animals, but this project will not be completed for a number of years.

If the UK exits with an agreement a transition period lasting until the end of 202, will give the port more time to build the permanent border check compound for border checks in the long term.

The 16-acre site was once owned by Glencullen, the Renault motor group owned by businessman Bill Cullen, until Ulster Bank appointed receivers to the business in 2012.

The property was the subject of legal proceedings taken by Mr Cullen in 2014. Baku GLS bought the property, which has the capacity to hold several thousand cars, the following year.

The Government is spending hundreds of millions of euro to prepare for a hard Brexit but hoping that the infrastructure will not be required should there be a close post-Brexit relationship between the EU and UK.