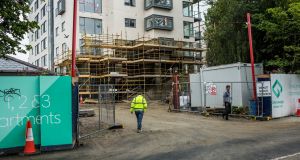 The Herbert Hill apartment complex in Dundrum as it was nearing completion in 2019. Photograph: James Forde

There were some interesting takeaways from the CSO’s latest residential property price index. Prices decreased by 0.5 per cent nationally in the year to July, while in Dublin the decline was 1.3 per cent. House prices in the capital decreased by 1.2 per cent while apartments increased by 0.4 per cent. The highest house price growth in Dublin was in Dún Laoghaire-Rathdown at 1.3 per cent, while Dublin city saw a decline of 2.7 per cent.

As noted by Goodbody chief economist Dermot O’Leary, the non-household sector (private companies, charitable organisations, and State institutions) accounted for 41 per cent of new home purchases in July and for 39 per cent over the past 12 months.

“This included 48 per cent of new homes in Dublin over the past 12 months . . . this has been a trend that has been in place for some time and highlights the role that government vehicles (approved housing bodies, for example) and the private rented sector are having,” O’Leary said.

One such transaction that has been widely reported, and has generated a lot of criticism, was the sale of the Herbert Hill apartment scheme in Dundrum village by housebuilder Glenveagh to German pension fund Realis for €55 million at the end of last year.

Realis signed a long-term deal to let the building to Dún Laoghaire-Rathdown County Council, which plans to use it for people on its housing list. paying up to €3,000 a month in rent for the units.

The deal allowed Glenveagh to sell the scheme as a job lot rather than taking the risk of selling the units individually. The pension fund gets a blue-chip investor and a strong yield, and the council secures housing for those on its waiting list, albeit at a hefty annual cost.

But the deal will no doubt also have disappointed many first-time buyers who would have been eyeing the scheme as a potential home during the many months of its construction. It is just one example of the dysfunction of the Irish housing market at present.