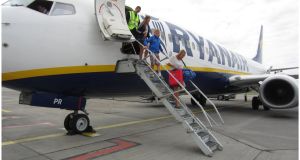 Earlier this month, Ryanair said it would slash 1,000 flights from its Republic-UK schedules.

Ryanair is to close its base at Frankfurt Hahn Airport and will likely close bases at Berlin Tegel and Duesseldorf Airports at the end of the summer after German pilots rejected proposed pay cuts, the Irish airline said on Tuesday.

The moves, which will include an undisclosed number of pilot job cuts, come after a slight majority of German pilots voted against a proposed deal of savings that Ryanair said were required by Covid-19 disruption.

“We must move on with alternative measures to deliver savings, which regrettably will mean base closures and dismissals,” Ryanair said in a memo to German pilots.

Earlier this month, Ryanair said it would slash 1,000 flights – with the potential loss of up to 200,000 passengers – from its Republic-UK schedules in August and September as Covid quarantines remain in place here.

It said the Republic had become the only EU country with a 14-day quarantine restriction on all arrivals from other states in the bloc, most of which it claimed had lower Covid-19 infection rates.

The company plans to cut 1,000 flights between the Republic and UK, mainly from Cork, Shannon, Kerry and Knock airports, but with some from Dublin, as it says the quarantine rule is damaging travel between the two states.

“Ryanair will significantly reduce its flights between Ireland and the UK in August and September, to reflect this suppressed demand,” the airline said.

Its statement warned that this would cut visitors from the UK to Cork, Shannon, Kerry and Knock by 100,000 during the peak summer months of the tourism season.

Ryanair argued that it made no sense for the Government to treat nations such as Germany, Denmark and Greece as if they were suffering similar coronavirus infection rates to the US, Brazil and India. – Reuters