Upgrade of 250,000 vehicles to be extended to nearly every modern Mercedes diesel 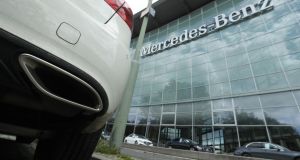 Daimler is seeking to head off a growing crisis over potential emissions cheating by voluntarily recalling more than 3 million Mercedes-Benz diesel vehicles in Europe.

The company will extend an ongoing upgrade of about 250,000 compact cars and vans to nearly every modern Mercedes diesel on the road.

The plan, which involves a software patch and avoids complex component fixes, will cost the automaker about €220 million, the company said in a statement on Tuesday.

If accepted by officials it could help Daimler avoid the massive penalties that beset Volkswagen.

“This is finally a proactive move to put something on the table and a solid attempt at getting out in front of the debate,” said Juergen Pieper, a Frankfurt-based analyst with Bankhaus Metzler. The cost of the recall, at about €70 per car, is “extraordinarily low” and could rise, he said. Owners will not face any bill for the recall.

The plan marks a change of approach after Daimler vowed to fight accusations of cheating by “all legal means” following a meeting with government officials in Berlin last week. With diesel crucial to Daimler’s strategy to lower carbon-dioxide emissions, the automaker can ill afford to have the technology and its reputation burdened by doubts and allegations.

The crisis has clouded Daimler for months, with hundreds of police officers and prosecutors participating in searches at company sites in May as part of an investigation opened earlier this year.

German authorities have been scrutinising the carmaker for possible emissions cheating involving two engines used by Mercedes. Daimler is also the subject of an investigation in the US into allegedly excessive diesel emissions.

Unlike Volkswagen, which admitted it deceived regulators, Daimler says it adhered to regulations that allow vehicles to reduce emissions controls to protect a car’s engine.

Still, ongoing concerns about diesel in the aftermath of the VW scandal have sullied the technology and prompted the home states of Daimler, BMW and Audi to push for driving bans on older models to cut air pollution.

While demand has declined since the Volkswagen crisis erupted in September 2015, diesel still accounts for about half of total passenger car sales in Europe. In a sign of Daimler’s commitment to shore up diesel the manufacturer also plans a “rapid” rollout of a completely new diesel engine family, the carmaker said in the statement.

The recall will take several months, according to Daimler spokesman Matthias Brock. He said Daimler has informed German authorities about its decision.

Germany’s transport ministry declined to immediately comment on the recall.

“The public debate about diesel engines is creating uncertainty,” Daimler chief executive Dieter Zetsche said in a statement on Tuesday. “We have therefore decided on additional measures to reassure drivers of diesel cars and to strengthen confidence in diesel technology.” – Bloomberg