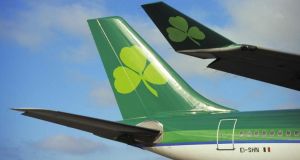 Aer Lingus workers are seeking the return of up to €100 million paid into a fund to prop up the salary-linked pension plan closed last year as part of a settlement of a long-running dispute.

Staff transferred from the old Irish airlines’ superannuation scheme (IASS) to a new defined contribution plan, to which the company contributed €191 million, at the beginning of the year. Unions say a supplementary scheme to the IASS, set up when the airline floated in 2006, should be returned to staff. They estimate the €70 million put into the fund could have since grown to €100 million.

Mr O’Loughlin said the workers involved fear the supplementary fund could be forgotten if the proposed takeover by International Consolidated Airlines’ Group (IAG) went ahead.

He said the concerns were rooted in the fact that transfer of undertakings legislation, which protects workers’ terms and conditions where a business changes ownership, did not apply to pension rights. He said the trustees and Aer Lingus should have redistributed the supplementary fund months ago, as the agreement to wind up the old IASS was reached in November.

“If it is let drag on much longer, they could find themselves with another dispute,” he said.

An Aer Lingus spokesman said the management of the second supplementary scheme was a matter for its trustees. “Aer Lingus has written to the trustees indicating its preferred approach, which is to distribute the assets to the members of the scheme,” he said.

Aer Lingus said the choice of financial adviser and of financial instrument was a matter for the scheme’s trustees and that the trustees were appointed by agreement between the workers and the company.

Meanwhile, Minister for Transport, Tourism and Sport Paschal Donohoe is due to update the Cabinet on IAG’s €1.36 billion bid for the airline. IAG has been in talks with senior Government officials for some weeks.