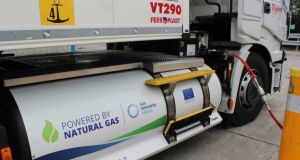 Gas Networks Ireland is launching a €2.9 million fund to give grants to transport companies that switch from diesel vehicles to engines fuelled by gas.

Gas Networks Ireland (GNI), the State-owned gas infrastructure company, is launching a €2.9 million fund to give grants to transport companies that switch from diesel vehicles in favour of engines fuelled by gas.

GNI is offering companies up to €5,000 per vehicle if they buy trucks, vans or buses that run on compressed natural gas (CNG) instead of diesel. It will pay up to one-fifth of the extra price difference between a CNG-run vehicle and a diesel one. Each company is limited to an award of up to €60,000, which is in effect 12 vehicles.

The gas network business says vehicles running on naural gas can reduce emissions by up to 23 per cent and deliver fuel cost savings of more than one-third. Diesel heavy goods vehicles account for just 4 per cent of vehicles but 30 per cent of road transport emissions.

“Carbon neutral renewable gas made from food and agricultural waste, which was first introduced onto the gas network in 2019, is structurally identical to renewable gas and can be used in exactly the same way through the existing infrastructure, technology and appliances,” said Gas Network Ireland’s Declan O’Sullivan, who is in charge of its compressed natural gas drive.

“This means that as the volume of renewable gas on the network increases, vehicles fuelled by CNG will increasingly reduce their carbon footprint without needing to change a thing.”

5 DCU rolls out e-scooter scheme on its campuses

10 GAA gets go-ahead for new hotel near Croke Park