‘The Irish Times’ Business Person of the Month: Albert Manifold 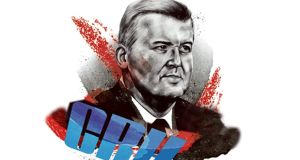 CRH chief executive Albert Manifold is the recipient for September of The Irish Times Business Person of the Month Award, in association with KPMG.

During the month, CRH agreed to buy Ash Grove Cement, the US’s fifth-largest cement company, for $3.5 billion (€2.9 billion), helping to lift its share price by 8 per cent. The news came just weeks after it sold its lower-margin Americas distribution business for $2.63 billion, having cited an inability to secure market leadership in this segment.

Based in Kansas, Ash Grove is the last major independent cement manufacturer in the US, operating eight plants. The deal will bring CRH’s North America cement capacity to 13.3 million tonnes from 5.3 million previously.

The deal will be financed through CRH’s existing financial resources and is potentially transformational for the group in this market segment, if successfully integrated. The deal is subject to shareholder and regulatory approvals.

Since Manifold became CEO in January 2014, CRH has spent more than €12 billion on various acquisitions.