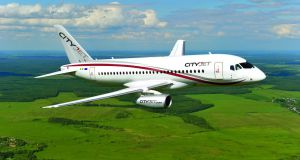 CityJet lost €30 million last year as the airline expanded and invested in new aircraft to meet the demands of new business.

The Irish carrier has switched its focus from scheduled services to wet leasing, providing craft and crew to fly services on behalf of other airlines.

The company has said that it lost €30.2 million before tax in 2016, driven by a once-off cost of €8.4 million, mostly from buying new aircraft, and a foreign exchange loss on financing of €13.1 million.

Speaking after it published its results, executive chairman Pat Byrne said that CityJet expected cash flows to strengthen next year. “We should have profits worth writing home about in 2019,” he added.

This year’s figures will reflect contributions from Blue1, the Finnish rival CityJet bought in 2016, and Cimber, the Danish carrier it purchased in January. Along with the acquisitions, the airline has been buying new craft – the Bombardier CRJ900 and Sukhoi SSJ100.

It now has 34 craft flying regional routes for SAS, Brussels Airlines, Air France and KLM and has crew based in nine locations in Europe.

Mr Byrne said that the carrier hoped to sign a contract to provide wet leases with a new customer in 2018 and to expand existing deals by the end of this year.

“The business is changing,” he said. “The larger airlines are looking more and more at outsourcing their regional routes.”

Wet leasing cuts the risk for CityJet, as its partners have to sell the seats on the flights and cover fuel costs, while the Irish carrier provides the craft, crew and maintenance.

Mr Byrne said it was rowing back on scheduled services, which would ultimately amount to only 15 per cent of its business.

It will continue with its flagship Dublin-to-London City Airport flights, which it operates seven times a day.