Facebook CEO Mark Zuckerberg responds to questions from US senator Diane Feinstein about what Facebook is doing to combat foreign interference in elections. 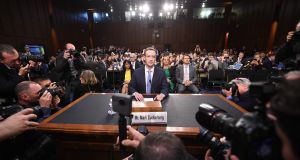 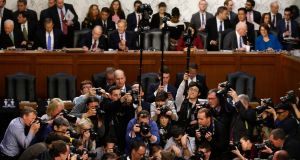 Facebook CEO Mark Zuckerberg is surrounded by members of the media as he arrives to testify before a Senate Judiciary and Commerce Committees joint hearing regarding the company’s use and protection of user data, on Capitol Hill in Washington. Photograph: Leah Millis/Reuters

Facebook chief executive Mark Zuckerberg has fended off questions from US senators on how the world’s largest social network might be regulated more closely.

Mr Zuckerberg repeated apologies made on Monday for a range of problems that have beset Facebook, from data privacy to foreign attempts to influence US elections, but the internet mogul managed to deter any specific talk about new laws and made no new promises.

“I’ll have my team follow up with you so that way we can have this discussion across the different categories where I think this discussion needs to happen,” Mr Zuckerberg told a joint hearing by the US Senate’s commerce and judiciary committees, when asked what regulations he thought were necessary.

He denied that Facebook, which has more than 2 billion monthly users across the world, was a monopoly. “It certainly doesn’t feel that way to me,” Mr Zuckerberg said.

Wearing a dark suit and tie instead of his typical T-shirt and jeans, Mr Zuckerberg appeared largely unruffled as senators questioned him. Investors welcomed his performance.

“Zuckerberg is conciliatory in his presentation,” said Mariann Montagne, portfolio manager at Gradient Investments in Arden Hills, Minnesota. “The stock is running up on his comments. Maybe people like seeing Zuckerberg in a suit?”

The shares fell steeply last month after it came to light that millions of users’ personal information was harvested from Facebook by Cambridge Analytica, a political consultancy that has counted US president Donald Trump’s election campaign among its clients. The latest estimate of affected users is up to 87 million.

During the hearing, Mr Zuckerberg was told by politicians that if the social media giant cannot staunch its privacy leaks, he should be prepared for the US Congress to wade in to police it.

In opening statements, they excoriated Mr Zuckerberg for failing to protect users’ personal information amid the furore sparked by a leak of data from up to 87 million Facebook users to Cambridge Analytica.

“Facebook has a responsibility to protect this personal information,” said Bill Nelson, the top Democrat on the Senate commerce committee. “Unfortunately, I believe that the company failed to do so. This is not the first time that Facebook has mishandled its users’ information.”

He added: “If Facebook and other online companies will not or cannot fix these privacy invasions, then we are going to have to, we the Congress.”

John Thune, the Republican chair of the commerce committee, said: “In the past, many of my colleagues on both sides of the aisle have been willing to defer to tech companies’ efforts to regulate themselves. But this may be changing.”

Chuck Grassley, the Republican chairman of the judiciary committee, said many Facebook users still did not understand how their personal information was “collected, protected, transferred, used and misused”.

“At a minimum, consumers must have the transparency necessary to make an informed decision about whether to share their data and how it will be used,” Mr Grassley said. “The status quo no longer works.”

In Mr Zuckerberg’s opening remarks, he set out to balance apologies for past mistakes with an insistence that Facebook is tackling problems on the social network, as he begins two days of testimony.

“We face a number of important issues about privacy, safety and democracy, and you will rightfully have some hard questions for me to answer,” he said.

“We didn’t take a broad enough view of our responsibility, and that was a big mistake. It was my mistake, and I’m sorry,” Mr Zuckerberg said in his opening remarks. “I started Facebook, I run it, and I’m responsible for what happens here.”

Facebook has unveiled a barrage of initiatives designed to show Mr Zuckerberg is already addressing public and political concerns. In its latest reform, announced just hours before the hearing, Facebook said it was launching a “data abuse bounty” programme to reward people who report any misuse of data by app developers.

But the company’s actions are unlikely to deter politicians intent on acting tough and inquiring into the need to regulate his business.

In a CBS poll published on Tuesday, 63 per cent of Facebook users in the US said the social network was “unsafe” and 51 per cent said its response to the Cambridge Analytica controversy had been “unacceptable”. – Reuters/Financial Times