Workvivo to create 100 new jobs in Cork as business booms 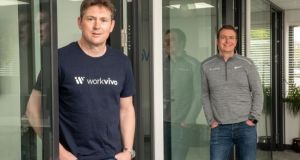 Irish technology company Workvivo, which recently raised $16 million in funding, has announced plans to create 100 jobs in Cork over the next three years.

The company said the new jobs were being created in response to increased demand for its software platform during the Covid crisis.

Founded by John Goulding and Joe Lennon three years ago, the Douglas-based company has developed an internal communications platform to increase employee engagement.

Taoiseach Micheál Martin said the Workvivo story is testament to the ability of indigenous Irish companies to make an impact on a global scale.

“Workvivo founders John Goulding and Joe Lennon are very committed to Cork and Ireland, and I look forward to seeing their business grow and expand over the coming years.”

Workvivo said it has experienced 200 per cent growth in user numbers over the past year with 40 per cent of its customer base having joined since March.

The company, whose clients include Bus Éireann, University College Cork, Netgear, Kentech, Telus International and Cubic Telecom, said it has customers across 47 countries.

US investment firm Tiger Global Management, which has previously backed the likes of Airbnb, Facebook, Spotify, LinkedIn, Uber and Stripe, led a $16 million Series A round in May with Dublin’s Frontline Ventures and Enterprise Ireland also participating.

That investment brings total fundraising to date for Workvivo to $17.5 million after the company last year raised €1.5 million in investment from backers that include Zoom founder and chief executive Eric Yuan.

“We are delighted to announce our growth plans today. In the new world of remote working it is more important than ever for companies to have the right communication technology for the workforce, said Mr Goulding, Workvivo’s chief executive.

“Bringing the workplace culture to life and engaging the workplace now becomes something you need to be able to do digitally, and this is exactly what Workvivo is excited about helping organisations with,” he added.