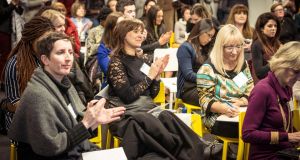 Attendees at the Women Funding Women event in Dublin last week, which was organised by the Dell Women’s Entrepreneur Network.

Women continue to face more obstacles than men in choosing to work in the tech sector, one of Ireland’s leading venture capitalists has said.

Jayne Brady said women who opt for a career in IT, in particular those who decide to set up their own companies, don’t just drift into tech but make a conscious decision to be in the space.

Speaking at an event in Dublin last week, Ms Brady, a partner at Kernel Capital, said this indicated that female tech entrepreneurs are both focused and highly motivated.

Ms Brady, who has more than 25 years’ experience working in senior positions in the tech space, was among a number of speakers at the Women Funding Women event, organised by the Dell Women’s Entrepreneur Network.

While stressing that neither she nor her colleagues consciously make investment decisions based on whether a founder is male or female, Ms Brady did say that the drive shown by women tech entrepreneurs can be a factor worth considering when funding decisions are being made.

In addition to her role as a partner at Kernel, which typically leads institutional Series A investments up to €2.5 million in early stage companies, Ms Brady has previously held senior positions at Intune Networks, Flextronics and Nortel.

She said part of the difficulty female founders face when seeking funding is that many tend to be focused on the business to consumer space, an area that few funds actively engage with.

At the event, which was held in Huckletree, Aisling Keegan, vice-president and general manager of Dell Ireland, pointed to newly published research showing that of every £1 invested in start-ups in the UK last year, less than a penny went to companies founded by women.

TechIreland, which is tracking just in excess of 350 female-founded start-ups, has said that while access to funding is difficult for women in the Republic, it isn’t as bad as in the UK. The organisation last year launched a €100 million campaign to increase funding levels for female businesses from about €80 million.

Founder Niamh Bushnell told attendees TechIreland would be publishing an update for its campaign shortly.

She hinted that the provisional figures indicate that funding for females has improved over the last 12 months, but added that a substantial portion of this investment was public money.

Ms Bushnell also pointed to this issue and called on female entrepreneurs to get out there and talk with other women who have gone out and raised money and are a couple of years ahead.

“Find them and ask them for help, because your network is everything and it is the best way forward,” she said.

Other speakers on the night who outlined their experience as female founders included Anita Finnegan of Nova Leah, Aisling Teillard of Tandem HR Solutions and Fiona Edwards Murphy of ApisProtect.