Payments company will move into Estonia, Greece, Latvia, Lithuania and Poland this year 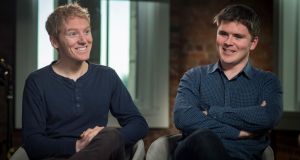 In 2010, when Patrick Collison founded Stripe with his younger brother John, he thought the world was headed toward ever-increasing globalisation, economic stability and international commerce.

Now, based on the events of the last couple of years, nobody holds “so Panglossian a view,” said the 30-year-old chief executive.

“There are more headwinds to global economic integration than there were any time in the past 20 years,” Collison said. “That’s going to make global expansion more difficult for businesses in general.”

Stripe builds software and payment infrastructure that helps businesses accept money online and across borders. And even as nationalism is on the rise, Stripe will continue its de-facto march for globalisation, as if its business depended on it, which in some respects, it does. Collison said the company will add a half-dozen countries in the next few months to the 23 where service is widely available today.

Part of the wager investors have made on Stripe is that it can keep getting a piece of more transactions and in more locations. However, the business is vulnerable to an economic downturn that would constrain consumer spending and the spread of a strain of politics that could place higher barriers on companies to operate internationally. So, it’s natural that Collison would see impediments to global trade as “obviously a bad thing.”

One thing that could drive further momentum for the business, according to Collison, is that red tape makes Stripe more valuable to companies. As doing business internationally becomes more complicated, more companies will want to pay for a service like Stripe to handle it for them, he said.

Collison will test this theory with a forthcoming expansion in the euro zone. The new markets – Estonia, Greece, Latvia, Lithuania and Poland – are smaller economies that may have more trouble navigating the European Union’s volatile business climate as it grapples with the consequences of Brexit, GDPR and a dimming economic outlook across the region. Collison said the countries have strong developer talent and vibrant tech scenes. Stripe should assess these markets on their potential and not their current size, he added.

Stripe will also offer services in Malaysia soon, and Collison said the company is eyeing India. Stripe has been testing the product with customers in India for about a year, and the world’s second-most-populous country is expected to generate more e-commerce growth in the future. However, local regulations pose obstacles to a nationwide rollout.

This year, in an attempt to keep a more global perspective, Stripe plans to make the majority of its hires in offices outside its headquarters in San Francisco. It currently has engineering hubs in Dublin, Seattle and Singapore. “There’s so much that’s market- and country-specific about money,” he said. “We don’t want to be this San Francisco company that swaggers in, thinks it knows everything and has all the answers.”

Collison, who dropped out of MIT to start Stripe, said many Americans have been focused on the wrong economic trends. “From my standpoint, the biggest thing in internet news, like if you were writing the annual report of the internet last year,” – he made typing motions in the air – “is barriers between countries getting higher and much more active, country-specific regulation.”

Even as Collison was eager to discuss some of the global economy’s greatest questions, he was reticent to discuss one of his own. He declined to comment on plans for an initial public offering.

Collison said Stripe benefits when online commerce grows. The idea harkens back to one Google has promoted over the years, that increased internet usage helps its ad business. Perhaps not coincidentally, Stripe has been hiring more people from the search giant. Diane Greene, the former chief executive of Google Cloud, recently joined as the fourth outside director on Stripe’s board. The company also hired its chief technology officer and head of security from Google.

In addition to processing payments, Stripe runs some seemingly tangential projects. It publishes a quarterly magazine about software engineering called Increment; it acquired a forum for entrepreneurs called Indie Hackers; and it recently started printing books through Stripe Press about broad ideas in economics, technology and management.

The ventures have prompted some observers to scratch their heads. It’s a curious way for a young company to spend investor money. But if books, magazine articles and an online community can help someone make the jump to starting an online business, Collison reasons, then they might choose to accept payments through Stripe.

“These are not just feel-good projects,” Collison said. “There’s a real, underlying, strategic reason. Ultimately, what will determine Stripe’s success in 10, 20, 30 years is the overall vibrancy and success of the internet economy. If we really take that seriously – and we try to – then these are important.” – Bloomberg

1 More than 40% of help-to-buy recipients already had deposit
2 Owner of Dundrum Town Centre to sell prized assets
3 Most workers now expect ability to work from home part-time
4 Help-to-Buy bonus; a taste for working from home; and two landmark deals
5 Stocktake: Is the shoeshine indicator flashing red for stocks?
Real news has value SUBSCRIBE