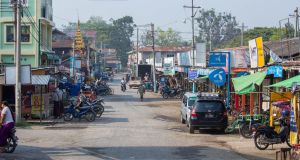 Mr Nagle established Red Dot Network, which allows customers to buy mobile phone credit and pay bills, after emerging from bankruptcy in 2014, with backing from Denis O’Brien’s Digicel, which sold the business to him last year.

Reports in the south-east Asian country say that Red Dot ceased operating in December, prompting concern among agents that the company would not return deposits that they had paid to it.

Mr Nagle said that he was unable to comment when contacted yesterday but indicated that he would have more information in coming days.

According to the Myanmar Times, Red Dot has not applied to the country’s Directorate of Investment and Company Administration to be wound up.

However, the newspaper states that Red Dot has not traded since December and has not given a reason for this.

Agents were yesterday said to be considering legal action for the return of deposits paid to the company.

The agents – mainly retailers – provide access to Red Dot’s system, which enables customers with no access to banks to make electronic payments.

He added that Red Dot hoped to grow this to 30,000 over the succeeding two years and planned to expand into areas such as facilitating payments for concert, airline and bus tickets.

The businessman is best-known in the Republic as the founder of Alphyra, the payments company that merged with British business, Cardpoint, to become Payzone.

He left that business in 2008 as shareholders grew concerned by its debts. In 2013 Mr Nagle was declared bankrupt in the UK and was discharged a year later.

Bank of Ireland repossessed his former home in Shankill, Co Dublin, in 2017 on foot of a €5.7 million mortgage.

Mr Nagle began Red Dot when Myanmar opened up its economy. Digicel was one of a number of groups interested in establishing a mobile network in the country at the time.

1 Over 400 complaints from migrant workers at meat plants lodged with WRC
2 Coronavirus: We must save lives but we also need to live
3 Grounded Aer Lingus pilots develop fix for turnaround glitches
4 Staff at Dublin and Cork airports to vote on work practice changes
5 Moving in and out of lockdown is a recipe for economic disaster
Real news has value SUBSCRIBE