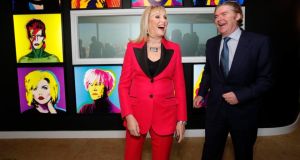 At the end of last year, Dan Kiely’s company announced an expansion that will see it become a bigger employer in Ireland than Facebook. It’s another milestone for a business that he founded 20 years ago with his wife, Linda.

Four hundred new jobs at its Irish offices will bring to more than 2,000 the numbers employed by the Cork company Voxpro in Ireland alone. That doesn’t take into account the people it employs in the United States, where Voxpro, which offers customer-experience, technical-support and sales-operations solutions to international customers, has stepped up its game in recent months.

But Kiely hasn’t let it all go to his head.

“I still have the mentality that we’re a company of six people. The day you start believing you’re a big company is the day you start closing your doors, really,” he says. “At the end of the day, I really believe that.”

That modesty is something he attributes to being Irish – the ability to take a compliment and fend it off. He’s uncomfortable calling himself an entrepreneur. “It’s a label, but I suppose it’s what I am.”

Even taking compliments about the business causes a noticeable change in his demeanour, although there is a lot of pride about what Voxpro has achieved as a company too.

“In the States, it’s probably the opposite, which is probably healthier; somewhere in between is probably right. We could do with a bit more self-promotion at times,” he says.

“You get over that when you’re working in the Bay area quite a bit, which I am. If you’re the best in the world at doing something and someone says it out there to you, you take it much more readily than you do in Ireland.

“If you look at Ireland, how many CEOs of companies are calling themselves presidents? It just wouldn’t happen here in Ireland, I don’t think. I couldn’t imagine ever going into my local pub on a Friday night if I had a business card that said president and CEO. It just wouldn’t work for me.”

Still, he acknowledges that he may have to embrace it at some point in the future. Voxpro has global ambitions, including in the US, where the company announced in August it would create 500 jobs, with plans for a centre of excellence at its office in Athens, Georgia, and a $4 million investment.

His solution? “I’m just going to have to have two business cards: one for Ireland and one for the rest of the world.”

It hasn’t always been that straightforward but Voxpro’s ability to turn its business to a new medium is what has seen it through the tougher times.

“The key differentiator for us has been the ability to change, and change when you’re winning,” says Kiely. “It’s easy to sit back and say: ‘We’re doing great, why change?’ But change when you’re actually doing something really well is quite difficult. That has helped us to be successful.

“We’ve reinvented ourselves so many different times, going from paging to text messaging to call answering.”

Then came the recession, and with it, cutbacks from corporate customers and banks tightening credit at a time when Voxpro was expanding.

Once more, Voxpro had to reinvent itself, focusing on what Kiely says were companies that were completely immune to recession – the Googles of the world.

Landing a contract with Google in 2009 was Voxpro’s big break. It opened its office in San Francisco and found it had a calling card for other companies. In the past three years it has grown fivefold, fuelled by growth in its partners such as Nest and Airbnb, and by the signing up of new partners in the internet of things and fintech sectors.

Kiely is keen to ensure that his business partner and wife, Linda, gets equal recognition when he talks about Voxpro and its success. And rightly so: not only is Linda an active force in the business, she put up the original money needed to get things off the ground two decades ago.

The couple met when they worked for the Irish Examiner, where he worked in the advertising department and she was his boss.

“There would be no business without Linda. She was the original venture capitalist. We wouldn’t be employing all these thousands of people globally if it wasn’t for her, and her vision, in terms of believing in me and believing we could create something amazing together from a business point of view.

“She was prepared to back herself and back me by remortgaging her house. If that’s not venture capitalism don’t know what is.”

The couple has been through some tough times, including a white-knuckle period with the business when a credit squeeze during the recession put serious pressure on the firm at a time when Voxpro was expanding. Then there was Linda’s cancer diagnosis several years ago.

“If someone has said to me: ‘Give me the keys to your car, your house and your business to make this go away,’ I would have done it without thinking about it. It gives you perspective on life,” he says. “Business is business but your health and your family and friends are way more important.”

As a team, the two seem stronger than ever.

“We wouldn’t have achieved anything near what we have as a couple if we’d tried to do it individually,” Kiely says, although he is realistic about the overlap between personal and private. “I don’t believe any couple who work together and who say they can go home and switch off just like that, because you just can’t – particularly as the business scales. You’re going to get calls from the US at odd hours. If your partner is involved, of course they’re going to be interested.”

Outside his relationship with his wife though, Kiely says it’s important to him to have a good circle of friends, ones who aren’t associated with Voxpro in any way. That gives him an outlet outside the business to discuss everyday things rather than being “on” 24 hours a day.

“Our business is 24/7 and, as we grow the business more globally, 12-hour days, 16-hour days, events in the evening, working weekends are now a business reality. I think it’s really important that you have friends who are there for you, who don’t give a damn about your business, they’re more interested in you as a person, the kind to pick you up when you fall down – and everyone falls down,” he says.

“They know the brand, but it doesn’t infiltrate their world. They know Voxpro, they know me and most of them would have a vague idea about what we do and recognise our customers. But it suits me just fine that way. I’d hate if they did know.

Kiely holds up his father as an example he would love to follow.

Voxpro is still growing. At the tail end of last year, the company opened its new offices in Dublin’s docklands area, an important location for them given the proximity of some of the company’s biggest customers. There is still a smell of new carpet about the place. That’s partly because of a last-minute change, Kiely explains, providing a bit of insight into the thought process of the founder.

“The carpets we originally put down didn’t work, they weren’t well finished,” he says, revealing another trait that has driven Voxpro on its journey – attention to detail. No matter what you do, be it design, answering emails, communicating. Treat everything the same way, with that strive for perfection.

“For me it’s always trying to be the best.” He pauses. “That sounds cheesy now.”

The new offices are impressive, designed around a jungle theme that extends to the building’s outdoor spaces. There are no typical tech company accessories, although there is a tank of tiny jellyfish in the reception area that is a bit mesmerising. The official opening of the office was a Studio 54 themed party, complete with Unicorn Tears gin.

Getting the offices right was a big thing for Voxpro, especially given the competitive jobs market.

“It is one of the things that is hugely important to us – our team. People we are trying to attract to Voxpro are typically graduates and they have a lot of choices and skills. You have to create an amazing work environment and culture to be able to attract talent,” he says.

“Work is a journey. It’s like life. If you aren’t enjoying the journey with people you are on it with, what’s the point?”

Although the company attracts graduates and sees them as important to the business, having the same values and vision is more important to him than having the piece of paper with qualifications on it. A mix of the two would be ideal, you suppose.

As in all things, Kiely has learned to trust his instincts. “I’m a very trusting person by nature. Trusting my gut instinct, and trusting that people say what they’re going to do. That hasn’t yet seen me wrong,” he says.

The company plans to expand further in Dublin, with Kiely outlining plans for a “very large” footprint in the capital.

Kiely has previously mooted the possibility an initial public offering as soon as the business hits a certain revenue target but that doesn’t mean he plans to let the business go to a larger corporation.

In fact, it’s only the beginning, he says. Voxpro is on track to employ 1,000 people in the US, and Kiely says there are further ambitions to open up centres in other parts of the world. He sees it as leaving a legacy.

“I think it’s very important for entrepreneurs. Irish entrepreneurs rarely see the journey through,” he says, acknowledging that it can be a difficult journey and that, when someone comes knocking on the door, it is tempting to take the help.

“For me, I want to change that. This is just the beginning. I want Voxpro to become the first global Irish outsourcer and take on some of the biggest names in the world in our sector. We’re not going to stop any time soon.”

Something that wouldn’t surprise you: He’s a perfectionist. Attention to detail is key.

Something that might surprise you: He owns a pair of Snap Spectacles. “I think they’re amazing.”