WhatsApp fights back as users flee to Signal and Telegram 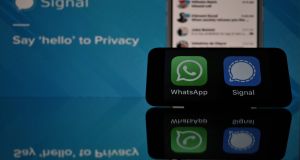 Signal was downloaded 8.8 million times worldwide in the week after the WhatsApp changes were first announced on January 4th. Photograph: AFP via Getty

Facebook is scrambling to deal with a sudden competitive threat to its messaging platform WhatsApp after a change to its terms of service sparked privacy concerns and prompted users to turn to rivals such as Signal and Telegram in droves.

The encrypted messaging app, which has more than 2 billion users globally, and several of its senior executives spent Tuesday trying to clarify forthcoming privacy policy changes covering the data that can be shared between WhatsApp and its parent now that it is deepening its push into ecommerce.

Signal was downloaded 8.8 million times worldwide in the week after the WhatsApp changes were first announced on January 4th, versus 246,000 times the week before, according to data from Sensor Tower.

The app also got a boost when Elon Musk, the chief executive of Tesla, tweeted “Use Signal” on January 7th.

By contrast, WhatsApp recorded 9.7 million downloads in the week after the announcement, compared with 11.3 million before, a 14 per cent decrease, Sensor Tower said.

Telegram, a popular messaging app among cryptocurrency traders, also benefited from the WhatsApp concerns. It reached 11.9 million downloads the week after the January 4th change from 6.5 million the week before, Sensor Tower said. In a message sent to all its users on Tuesday, Telegram said that it had now surpassed 500 million active users.

Some users interpreted WhatsApp’s new policies as suggesting that sensitive user data will be shared with its parent company for the first time, even including the content of messages, prompting outrage on social media – and a forceful correction from the company.

WhatsApp said in a statement posted late on Monday that the policy update, which comes into force on February 8th, “does not affect the privacy of your messages with friends or family in any way”, adding that it wanted to address “rumours going around”.

While neither app will be allowed to access any messages, WhatsApp’s privacy policies have since 2016 allowed it to share certain other user data with its parent company.

According to the latest update, Facebook and WhatsApp will now also be able to share certain payments and transactions data in order to boost advertising, as the company pushes further into ecommerce with the development of digital storefront features such as Facebook Shops.

The changes also outline how merchants communicating with customers via WhatsApp can choose to store those chats in Facebook-hosted servers, and use that data to inform their advertising on Facebook.

Several top company executives took to Twitter on Tuesday to publicly defend the changes, including Adam Mosseri, chief executive of Instagram, which is also owned by Facebook. “There is a lot of misinformation about the WhatsApp ToS [terms of service] right now,” he said.

Still, Jason Kint, chief executive of Digital Content Next, a US trade association for online publishers, noted that Facebook had initially promised that WhatsApp would not be required to share any data with its parent company when it was acquired in 2014.

“The announcement regarding further use of WhatsApp data in the Facebook mother ship reeked of a classic ‘bait and switch’ in which users were made promises around protecting their data only to once again have the promise broken,” he said, adding that regulators in the US and Europe were “are all filing lawsuits for Facebook’s repeated abuse of consumer data to lock in its market dominance”.

Signal was co-founded by WhatsApp co-founder Brian Acton after he left the company following disagreements over user privacy and its lack of independence from its parent company.

The sudden jump in users at Signal and Telegram has raised questions about whether the smaller apps are prepared to scale. Last week Signal said it was “continuing to shatter traffic records and add capacity” after experiencing some problems with the creation of groups on its services and delays in sending verification codes to users. – Copyright The Financial Times Limited 2021