Vodafone falls into the red after heavy investment in IT infrastructure 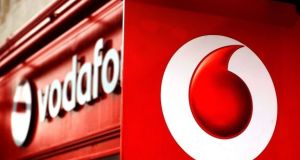 Vodafone, which is the largest mobile operator in the Republic, has 2.3 million customers in total

Vodafone Ireland has recorded a €5.04 million pretax loss for the 12 months ending March 2019 after investing heavily in its network ahead of the roll-out of 5G services.

The company, which became the first mobile operator to roll out 5G in the Republic earlier this year, reversed a €5.6 million profit in the 2018 fiscal year after ploughing money into upgrading its infrastructure.

As well as rolling out 5G services across five cities for the first time, the company continued to invest in 4G technology last year. It also continued with a soon-to-be completed €120 million project to overhaul its existing IT infrastructure to provide customers with a fully converged product and billing system for the first time.

Vodafone recorded a 1.4 per cent rise in revenues to €946.5 million from €933.8 million in the prior year as earnings before interest, tax, depreciation and amortisation (ebitda) grew to €175.3 million.

“It has been another positive year for Vodafone Ireland, which has seen growth across all the key areas of our business and reflects the ongoing strength of our key offerings – particularly across fixed broadband and mobile,” said chief executive Anne O’Leary.

Vodafone, which is the largest mobile operator in the Republic, has 2.3 million customers in total.

The company said that at the end of March, more than 1.1 million devices were being used on its 4G network, as rise of 26 per cent versus the same period a year earlier.

The company was owed €93.5 million by Siro, the joint venture it has with ESB.

1 Ryanair and Aer Lingus monitor impact of conronavirus on travel to Italy
2 Bank leaked my loan request to family who tried to rip me off
3 Boris Johnson's new immigration regime will damage much more than industry
4 Mastercard to create 1,200 new jobs by expanding base in Dublin
5 Garda mobile contract win causes concern over Eir’s use of Huawei kit
Real news has value SUBSCRIBE