Linden Lab’s Ebbe Altberg explains Sansar, which is ‘in no way a planned replacement’ model 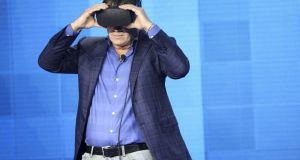 As technology goes, online virtual world Second Life is a bit of a dinosaur. Having first launched in 2003 – reaching peak popularity in 2007 – occasionally we hear of its citizens’ more bizarre escapades, such as the incident last year when supporters of US president Donald Trump arrived unceremoniously at a Sanders virtual meetup brandishing flags bearing images of swastikas.

Stories such as these paint a picture of a 3D rendered internet underbelly but surprisingly there are plenty of ordinary folk quietly going about their business in the other world; last year entrepreneurs in Second Life earned $60 million, according to Ebbe Altberg, chief executive of Linden Lab, the company behind the virtual environment. There is even a healthy education sector, with one education professional hosting classes for a user base of more than 10,000 students.

So it was with mixed feelings that I logged back into an account that has remained untouched since 2010. Like a returning ex-pat I found Virtual Dublin had changed beyond recognition.

Even I had changed, both my outfit and skin had expired leaving me floating in a disembodied state, wondering what to do and where to go next. After finding something to wear I teleported over to Japan to see if it was any better but no one understood what I was saying and all I could find was an empty bowling alley so I logged off, disappointed. C’est la (deuxieme) vie.

Second Life, while far from dead, is not easy terrain for the uninitiated. Linden Lab knows this and has been working away quietly for the past three years on a new virtual reality environment known as Project Sansar.

The idea is not to replace Second Life or even phase it out, says Altberg, who describes it as “a very healthy virtual world that will be very healthy for a long time to come”. It is celebrating its 14th birthday this summer and continues to have a dedicated team continually improving content and interaction experiences.

Sansar, says Altberg, has “spiritual similarities to Second Life in that it is a platform for individuals, brands and business to create virtual experiences but is in no way a planned replacement”.

“We would be as happy as clams if we have two successful products. We believe Sansar will attract a new and different audience that may not get what they want from Second Life,” he adds.

The big draw for Sansar will be its immersiveness. Anyone with an Oculus Rift or Samsung Vive headset will be able to take part, explore different environments and even create three-dimensional objects and building. It will be a little like Minecraft but in a more realistic environment. PC users can also take part but theirs will be a flat, 2D experience.

One of the big differences, other than the VR headset, is the focus on scalability. Altberg says that they want to learn from Second Life and why it never really grew beyond a certain user base: “We looked at why Second Life didn’t grow from a million users to five or 10 million. With Sansar we think we’ve knocked off several of the elements that hindered Second Life’s growth potential.”

Its creators also want to make it easier to navigate. Unless you’re inside Second Life you have no idea what is available, where to go and what to do.

“Second Life is like a hermetically sealed world; unless you spend some quality time figuring it out you won’t realise that you can do useful things like learn how to get training to triage patients, attend university-level virtual classes or maybe go to a concert. There’s so much stuff in there but it’s all hidden to the outside world and it’s not even that easy to find once you’re in there,” explains Altberg.

Sansar is being built as a platform rather than a closed world. Content creators are building what are called “experiences” that can be visited individually by Rift and Vive users. Linden Lab calls it the WordPress of VR: anyone can create an experience and it sits there waiting to be visited, creators can then share links to their VR mini world.

Right now, VR headsets are fairly expensive and a reasonably niche market occupied mostly by avid gamers. Linden Lab thinks Sansar can open it up to and enable a massive amount of virtual reality content to be easily and affordably created and shared in an interactive environment.

“We’re trying to democratise the consumption and creation of social VR,” states Altberg.

Today, if you wanted to create a virtual reality experience (anything from hosting a meeting to creating a commercial showroom) and share it with friends or colleagues, it is a difficult and technically challenging undertaking that requires a gaming engine and a team of engineers to equip it with communication and monetisation capabilities.”

Because the user will need an environment to update instantly as they turn their head, a minimum of 90 frames per second is required

This is what Linden Lab has spent the last three years perfecting, which has also involved figuring out how to host a large audience of avatars at any one time. In Second Life, only 70 or 80 avatars can attend an event concurrently before it begins to lag but Sansar will be able to host thousands by running several instances at once. To the user, it will like there are 100 or 200 other people around them because they won’t see the other instances that are hosted on separate servers.

Sansar goes into open alpha in summer 2017, allowing anyone with a VR headset to sign up and try it out

Another issue they have spent a lot of time figuring out is how to render a high-quality VR experience in real time. Because the user will need an environment to update instantly as they turn their head, a minimum of 90 frames per second is required. This is no mere Second Life upgrade in terms of technological advancement.

Sansar goes into open alpha in summer 2017, allowing anyone with a VR headset to sign up and try it out. Meanwhile, over 12,000 content creators signed up since last August and have been busy creating their own VR experiences for others to visit. Without naming any names, Altberg says that they have some large brands interested in creating a Sansar experience, which brings us to the business model: how will people make money from Sansar and how will Linden Lab profit from this VR platform?

Sansar will most likely take a piece of the sales or a transactional fee, and they are looking into a monthly subscription fee

Altberg says that it will be considerably different from Second Life where users had to pay to own land or have access to a simulator: “We believe this model is too expensive and meanwhile we have this massive GDP, none of which Linden Lab captures.”

He says it is a bit like a real-world situation where there is massive property tax but zero consumption tax. Sansar will most likely take a piece of the sales or a transactional fee, and they are looking into a monthly subscription fee to own or operate a simulation with the possibility of owners charging for entrance or requesting a donation fee from visitors.

This will probably make sense to longtime Second Life citizen and owner of Virtual Dublin, John Mahon, who says that it is “very difficult to make money there now”. Mahon handed over management of his virtual city a few years ago while he left to work on other projects and recently returned to see it had been completely– and shoddily – rebuilt, undoing all of his hard work. No wonder my avatar was so disoriented.

Mahon plans to hire people to rebuild his city but in the meantime Sansar has piqued his interest. A recent meeting with Linden Lab founder Philip Rosedale resulted in an invitation to Linden Lab later this summer to discuss possibilities for the new platform but he isn’t about to abandon the old life.

“I think Second Life will continue on but it probably won’t get a lot more development on the platform side because it is pretty stable as it is. To walk away from Second Life and migrate to Sansar would leave a lot of content behind so it will continue to have a loyal user base. Besides, you’re paying a lot more for Sansar in terms of investing in a VR headset, whereas Second Life involves little or no investment,” he explains.

While we are waiting for Virtual Dublin to be restored to its former glory, Altberg says not to think of Sansar in such geographically limiting confines: “It will be destinations and experiences rather than cities. Why not visit Joyce’s Dublin, medieval Dublin, ‘true’ Dublin or a better Dublin?”

1 Who are Ireland’s 17 billionaires?
2 My father in a nursing home wants to gift me his house
3 Nama lends Cosgraves €15m to fund huge apartment development
4 Health insurance: Switch often for your financial wellbeing
5 Builders completed 21,500 homes in State during 2019
Real news has value SUBSCRIBE