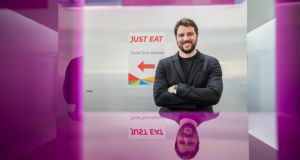 While food tech has tended to lag behind some other sectors in terms of innovation, it is rapidly catching up, according to Fernando Fanton, chief product and technology officer of online takeaway platform Just Eat.

Mr Fanton, who was in Dublin recently for a food tech event held at the Digital Hub, told The Irish Times that developments in areas such as augmented reality (AR), artificial intelligence, data analytics and machine learning are revolutionising the way people discover, order and eat food.

Unsurprisingly, Just Eat has its reasons for wanting to back technological developments.

“We would like to see a situation where people cook only when they want to enjoy the experience. Food should never be a chore and so making it easier to get food, rather than forcing people to cook when they don’t want to, is something we want to encourage,” said Mr Fanton.

Mr Fanton, who joined Just Eat early last year after spells working at Mendeley. com, Elsevier and McKinsey, said other benefits for consumers from food tech developments is that they encourage greater choice.

Just Eat directly employs about 300 software engineers to work on its proprietary technology platform, which offers a digital ordering service for 17.6 million users and 68,500 restaurant partners in 13 markets, including Ireland.

The company, whose app has been downloaded more than 850,000 times in Ireland since it was launched, recently confirmed its second food tech start-up accelerator. Five firms were selected for the inaugural 10-week programme last year which included mentorship, networking events and a £20,000 investment from Just Eat for a 5 per cent stake in each start-up.

“Food tech is in the early days of disruption. There are huge opportunities ahead and obviously we want to be part of that,” he told The Irish Times. “Our job is to bring the best technology to restaurants to help them grow and so we want to grow the whole ecosystem by helping start-ups find their own path,” he said.

“We want to be an open platform and as long as start-ups have something that gives value to restaurants, we are happy to open doors for them,” the Argentinean added.

In the same week in which Domino’s Pizza announced it had teamed up with London-based Starship Technologies to create six-wheeled self-driving robots to deliver food to customers in mainland Europe, Just Eat was at the Digital Hub to show off some of the innovations it is backing. These include a unique HoloLens AR experience that enables customers to see a restaurant menu as a buffet for them to pick and choose from.

The innovations, some of which are expected to be introduced in Ireland on a phased basis over the coming year, also sees the company partnering with Apple, Microsoft and Amazon to provide its ordering platform through the Apple TV, XBox One and Echo Alexa.

Mr Fanton said data analytics in particular was a key area in which restaurants could benefit by knowing more about their customers.

“Restaurants are usually extremely busy working all the hours there are and so they simply don’t have the time to investigate what customer data could be telling them. There are great insights to be gained from looking at the data, particularly as restaurants operate on a hyperlocal basis. We’re increasingly helping them to uncover information around things such as quality issues, delivery areas, types of foods that are in fashion and so on,” he said.

“Even something as simple as opening hours can make a difference. We can trial things in as small as a 1km radius and so have been able to tell individual restaurants that if they open just 20 minutes earlier in the day, or if they add a couple of paleo dishes to the menu, that orders will grow,” Mr Fanton added.